US law firm, Steptoe & Johnson, has issued an article speculating that western investors may be shut out of the sovereign debt market as a result of new or modified sanctions.  US (and EU) sanctions aimed at Russian debt financing have been in place since 2014.  The new concerns follow the warning last year against US or EU banks participating in a Russian sovereign Eurobond offering, on the grounds that the proceeds may be diverted to sanctioned state-owned enterprises.  Currently, U.S. law does not prohibit involvement in the issuance or trading of Russian sovereign debt. However, the recently enacted Countering America’s Adversaries Through Sanctions Act (CAATSA) in the US might alter the situation, particularly as section 242 requires the US Treasury to report on possible expansion of sanctions “to include sovereign debt and the full range of derivative products.”

Reuters, in an “exclusive” on 19th December reports that a draft FATF evaluation report says that Mexican prosecutors are failing to systematically punish money launderers and tax authorities are too lax with potential drug money fronts such as real estate and luxury goods firms.   The article notes that Mexico is the top source of illegal drugs to the US and both countries’ authorities have been criticised by civil society groups for leaving drug gang finances largely intact.  It says that the 200+ page report commends previous efforts to clean up the Mexican banking sector, and officials say tighter regulations flushed much illicit money from the banking system.  However, the report says Mexican tax authorities did not do enough to monitor businesses outside the financial sector used for money laundering, such as real estate.  Data in the report provided by Mexico shows the country seized just $32.5 million in 2016. That represents less than 0.1% of the $58.5 billion of illicit revenues the government estimates is generated by organised crime annually; and only 8% of investigations in Mexico last year were based on FIU reports, according to data in the FATF report. That is down from around an average of 15% in recent years.

A news release from the OCED on 19th December follows completion by its Working Group of the Phase 4 evaluation of Australia’s implementation of the Convention on Combating Bribery of Foreign Public Officials in International Business Transactions and related instruments.  The report further makes a number of recommendations to Australia aimed at strengthening its foreign bribery enforcement. Key recommendations highlight the need for Australia to:

On 19th December the International Consortium of Investigative Journalists (ICIJ) released information from 4 “secrecy jurisdictions” corporate registries that were included in the Paradise Papers investigation: Barbados, the Bahamas, Aruba and Nevis.  There are now a total of 55 jurisdictions searchable on the online Offshore Leaks database.

On 18th December Forbes published an article which says that, despite the large amount of US-origin material captured in Iraq (US weapons only accounted for 1.8% of all items documented between 2014 and 2017), around 90% of weapons and ammunition deployed by ISIS are Warsaw Pact calibres, mainly originating in China (China manufactured 43.5% of all ISIS weapons documented in Iraq and Syria), Russia and Eastern Europe.   This is according to Conflict Armament Research which analysed 40,000 items recovered from ISIS forces in Syria and Iraq between 2014 and 2017.  The unauthorised retransfer of weapons originally destined for Syrian opposition forces is also said to have proven a significant source of arms and ammunition for ISIS, particularly advanced anti-tank guided weapons systems.

The report concludes that many of the group’s weapons — and notably ammunition—are newly manufactured, having been delivered to the region since the start of the Syrian conflict in 2011.

The report is at –

The report also concerns itself with the procurement of chemical explosive precursors; and the supply sources of aluminium paste, nitrate-based fertilisers, and ancillary precursors, all of which IS forces use to manufacture homemade explosives (HME) and propellant. The findings are said to underscore the predominant role of the Turkish domestic market as a source of these precursors. 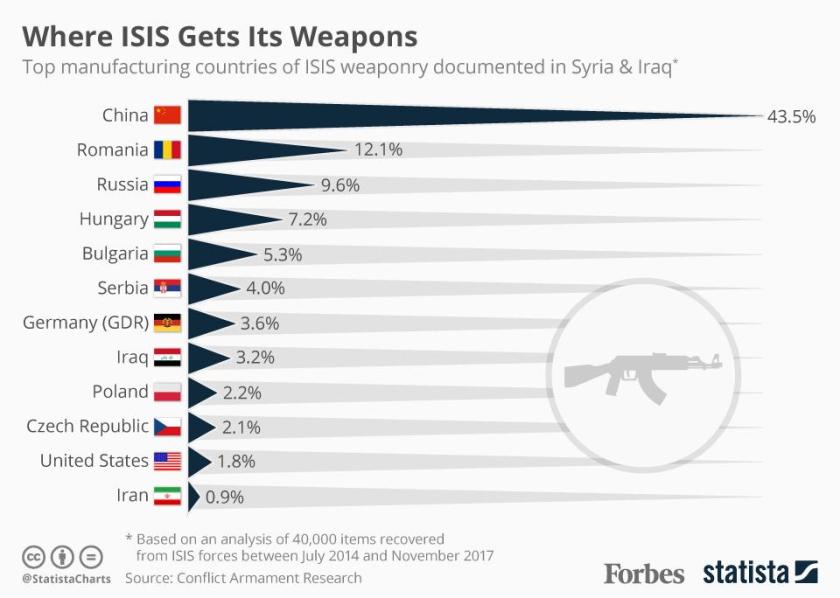 US-based think tank, New America, has published a lengthy paper: “Jihadists Terrorism 16 Years After 9/11: a Threat Assessment”, which includes a section highlighting some emerging trends in terrorist attacks, these include –

On 18th December the Isle of Man launched a public consultation on the Anti-Money Laundering and Other Financial Crime (Miscellaneous Amendments) Bill 2017, which contains proposed changes designed to enhance its compliance with global standards on AML/CFT.  The Bill also acts on the recommendations made by Moneyval in its mutual evaluation report to strengthen the regulatory framework and further protect the island from financial crime.  The Bill proposes new measures aimed at trustees acting in a personal capacity (non-professional trustees) and foreign trustees, including requirements to keep records.  There are additional record-keeping requirements for Foundations and changes that clarify the powers of the Companies Registrar to examine and investigate relevant documents filed with the Registry.  The proposed legislation includes a higher level of financial penalties for failing to grant law enforcement authorities timely access to information. It also makes it explicit that where parts of a dishonesty offence such as theft or forgery were committed abroad, these can be prosecuted in a Manx court. It would not matter if offenders were operating from abroad, as they would be caught by the legislation.

International Adviser reported on 18th December that Appleby, the law firm at the heart of the Paradise Papers hack is seeking damages and has demanded that the Guardian and the BBC hand over documents.

On 18th December the OECD said in a news release that Lithuania has taken significant steps to strengthen its legislative framework to combat foreign bribery.  However, it said further efforts are needed to ensure effective enforcement of anti-bribery laws with regard to corporate liability and imposing sanctions for foreign bribery, including confiscation, according to a new report by the OECD Working Group on Bribery.

On 18th December, HM Treasury published its response to its consultation which sought views on whether the draft Oversight of Professional Body AML and Counter Terrorist Financing (CTF) Supervision Regulations (“the OPBAS Regulations”) delivered on the government’s intention that the Office for Professional Body AML Supervision (OPBAS) helps to ensure that professional body AML supervisors (PBS) comply with their obligations in the Money Laundering Regulations; and the impact on business from establishing OPBAS.  The OPBAS regulations have now been laid in Parliament, and will take effect on 17th January when OPBAS will become operational.  HM Treasury has to review whether OPBAS is the most effective and efficient way to fulfill requirements by June 26th 2022.