A news release from US Immigration and Customs Enforcement on 13 August said that the DoJ, the Department of Homeland Security, and US Treasury announced the dismantling of 3 terrorist financing cyber-enabled campaigns, involving the al-Qassam Brigades, Hamas’s military wing, al-Qaeda, and Islamic State of Iraq and the Levant. These 3 terror finance campaigns all relied on sophisticated cyber-tools, including the solicitation of cryptocurrency donations from around the world. The action demonstrates how different terrorist groups have similarly adapted their terror finance activities to the cyber age.

In July, Transnational Alliance to Combat Illicit Trade (TRACIT), in conjunction with the American Apparel & Footwear Association published a report detailing the growing incidence of fraudulent advertising and counterfeits on popular social networking platforms like Facebook and Instagram and websites like YouTube and Google. The report shows that 70 major international brands have been targeted by fraudulent advertisements on social platforms, some of which receive up to a quarter of a million views before they are detected.

The new text, which has been submitted to HM Treasury for approval, has been incorporated into the JMLSG Guidance.

The new, updated guidance can be found at –

On 13 August, a report from Europol was published by the Global Coalition to Fight Financial Crime.  The main goal of this report is to highlight the link between sports corruption, in particular match-fixing and organised crime and to increase awareness among practitioners and the public.  It provides an insight into how the international criminal groups are involved in sports corruption, their characteristics and structure as well as the way criminal networks operate and cooperate. Organised crime group money laundering activities through sports corruption are also described.  In addition, the report examines the types of match fixing as the most prominent form of sports corruption monitored by Europol and looks into the Asian betting model. Furthermore, particular insight is provided into the most targeted sports by criminal networks with a focus on football and tennis.

A post on the FCPA Blog on 13 August said that Wirecard AG’s former chief operating officer is on the run from German police, who are now asking for help tracking him down. Jan Marsalek appears on a wanted poster released by Germany’s federal police agency, the Bundeskriminalamt or BKA. 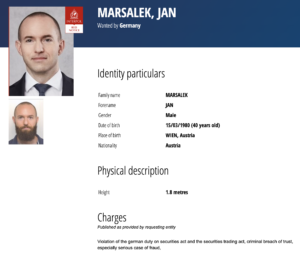 Rferl on 13 August reported that Uzbek authorities have paid more than a half-million dollars to a US public-relations firm to run a campaign aimed at lifting an international boycott against Uzbek cotton over the country’s use of forced labour to harvest the crop. Rights groups launched a boycott campaign in 2006 to force Uzbekistan to end its long-running state-controlled practice of forced labour – a policy that forces millions of citizens, including children, to pick cotton and meet harvest quotas. Since coming to power in 2016, President Shavkat Mirziyoev has gradually introduced laws aimed at eliminating forced labour and child labour but the article says that NGO claim the use is still rampant in the cotton sector and that some agricultural reforms closely mimic the previous system.

A news release from US Customs and Border Protection on 13 August announced that officers had intercepted 817 shipments of counterfeit batons destined to individuals throughout the US. Each baton carries a MSRP of $150 had the product been genuine. The batons, which were labelled to appear to be products of legitimate suppliers and were being imported through a freight forwarder in Illinois and had originated in Shenzhen, China.  They were declared on manifests as “selfie sticks,” and “window breakers”.  Accompanying the batons were potentially dangerous accessories such as spear tips.

On 7 August, DAC Beachcroft published an article about disclosure of items of which a party is actually aware (without further search) and are, or were previously, within its control, over which privilege cannot be claimed, and which damage the its case, or else support that of the opposition. This is a similar requirement to the disclosure requirements on the prosecution in criminal proceedings. The article is concerned with a recent case, and the question of the extent to which the disclosure obligations meant that a party had to attempt to harm its own case by actively tracking down the existence of such adverse documents. It refers to reasonableness and proportionality. It is said that the requirement need not mean that a party has to doggedly hunt down anything which could be harmful to its position, the checks which are made have to be reasonable, going to the right questions and directed to the relevant people.  Importantly, the article warns that it would also be prudent for those investigations to be fully documented in the event of question or challenge.

Law firm HFW has produced a briefing on transitioning to a new trade arrangement following the end of the Brexit transition period. It says that the UK Government has released a 200-page guidance document entitled ‘The Border with the European Union: Importing and Exporting Goods’ (also described as the ‘Border Operating Model’). The brief summarises the important details involved.

On 7 August, DAC Beachcroft published an article saying that fraud in the conveyancing sector continues to be a headache for stakeholders and a source of claims against solicitors. On 26 June, the Law Society and HM Land Registry issued joint guidance intended to help combat the fraud. It identifies key risks as impersonation of the seller or the conveyancer, a vulnerable seller, vulnerable property and where there is pressure to quickly close a deal.