An article in ENACT Africa (which I would argue is essential reading) on 26th November starts by saying that IFF are difficult to detect and prosecute when regulatory systems lack integrity, transparency, and accountability, and that Africa is estimated to lose billions of dollars annually to illicit financial flows – often driven by northern hemisphere countries (i.e. Europe, US and Canada).  The paper argues that international definitions, measures and regulatory frameworks are not always appropriate for the African context.  As such, a stronger understanding of how IFF are generated and moved and their impact is needed to better respond to African IFF and prioritise action against the flows and activities that are the most harmful.  As might be expected, it says that natural resource crimes are particularly immense and harmful.  The report points to the use of shell companies, trade-based money laundering (TBML), and the use of money value transfer systems (MVTS), arguing that there is a pressing need for greater political will and investment into responses which go beyond technical compliance with international standards. 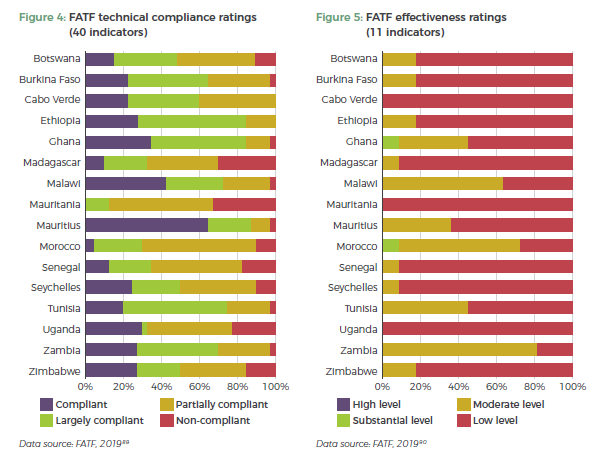 The report contains an interesting chart comparing African nations’ ratings for technical compliance with FATF Recommendations, and the effectiveness ratings.  It also introduces one to the concept of “felqlan” or ‘flying money’.  This is an ancient Chinese MVTS which is thought to be enabling the multi-billion-dollar illicit environmental trade.  Similar to the hawala, it relies on a network of brokers which enables the trade of illicit commodities without money ever leaving China.  A study is said to have revealed that the system relies on the systematic under-invoicing of Chinese imports into Africa and a seamless chain-of-payments system in which accounts are settled through the transfer of high-end — and often illicit — goods such as abalone, rosewood, rhino horn and ivory.