On 3rd October, a smuggler with some 2,000 goldfinches was arrested and the birds seized near the Syrian border.  Under Turkish law, hunting goldfinches is illegal.

On 1st October, the ACFCS blog reported that Tanzania’s central bank said that it had fined 5 commercial banks over $800,000 for breaching AML rules, the latest in a series of moves aimed at tightening financial crime regulation in the financial services sector while at the same time warding off insolvencies.  The fines were said to be for failure to conduct proper CDD and file suspicious transaction reports to the FIU.  The banks concerned were I&M Bank, Equity Bank, UBL Bank, Habib African Bank and African Banking Corporation.

CAMBODIA: BOOM IN CASINO AND REAL ESTATE SECTORS “DOWN TO MONEY LAUNDERING”

On 4th October, the Khmer Times reports that experts are concerned booming business in Cambodia’s casino and real estate industries is largely the result of money laundering.  According to figures from the Ministry of Economy reported in June, the number of casino licences issued by the government had risen to 163, adding that 91 of them are located in Preah Sihanouk province.  In February, FATF placed Cambodia on a list of countries described as “highly vulnerable to money laundering”.

The Sydney Morning Herald on 4th October reported that Pope Francis has named one of Italy’s leading anti-Mafia prosecutors, Giuseppe Pignatone, as president of the Vatican’s criminal tribunal.  This came after Vatican police raided the Apostolic Palace and seized documents and computers from the secretariat of state. Also searched were the offices of the Vatican’s financial watchdog agency, which is tasked with flagging possible money laundering and other suspicious financial transactions – said to be linked to a loss-making real estate deal in London that originated during the previous pontificate.

Lexology has published a briefing from Ramparts on Bitcoin, the regulation of virtual currencies in Gibraltar, how they are taxed, and answering the question of have any specific instances emerged in which virtual currencies have been used for money laundering or other fraudulent purposes?

On 2nd October, Holding Redlich published an article saying that Australia’s first National Freight and Supply Chain Strategy (Freight Strategy) was recently released, setting goals and targets for the transportation industry to 2024.  The article examines where the Freight Strategy came from and examine the third critical action area that was identified: better planning, co-ordination and regulation.  The strategy followed a recommendation made by Infrastructure Australia in 2016 that state governments and industry work together to develop a ‘whole-of-network’ strategy examining Australia’s freight and supply chains.  The aim was to identify priorities for Australia for the next 20 years to improve freight and supply chain efficiency and capacity.

In the previous parts, Part 1 provided an overview of the Freight Strategy and discuss the first critical action area: Smarter and targeted infrastructure investment, and asked if it would work.

On 4th October, KYC 360 reported that the UK used a third country to avoid US sanctions as it paid an Iranian bank a settlement in a £1.25 billion damages case.  Bank Mellat, 17% owned by the Iranian state, sued the UK government over sanctions imposed in 2009 that prevented it from doing business with the UK’s financial sector.  The Supreme Court ruled that the sanctions were illegal, Bank Mellat had sought £3.2 billion but received £1.25 billion with interest under a pre-trial settlement.  The payment was made through a third country and entity to evade US sanctions.

Shearman & Sterling on 3rd October published an article about a recent High Court case which upheld a bank’s attempt to avoid a common banking dilemma: the ‘double jeopardy’ of being contractually liable to make a payment in one jurisdiction that risks the imposition of criminal or regulatory liability in another.  In this case, if the bank had paid interest under a loan, it risked the imposition of US ‘secondary sanctions’.  It says that the decision re-confirms that the English Court will enforce clearly drafted contractual provisions aimed at avoiding ‘double jeopardy’ liability.

UN BODY PUBLISHED STANDARDS FOR USE OF DATA FROM SMART CONTAINERS

Loadstar on 4th October reported that the United Nations Centre for Trade Facilitation and Electronic Business (UN/CEFACT) has published its first set of standards which will help interoperability between different systems in the container supply chain.  The Business Requirements Specifications (BRS) initiative was led by smart container technology developer Traxens, which includes CMA GCM and MSC among its shareholders.  It is intended that data will be generated once and shared between multiple stakeholders, platforms and systems; improving data exchange, automated workflow and alert generation.

On 3rd October, Computing reported that the FBI has issued a public service announcement advising organisations on how they should handle ransom demands.  The FBI said that some victims never got a decryption key or were unable to recover all or most of their data because of flaws in the malware algorithms even after paying the ransom; and it warned that victims must report the incident immediately to law enforcement agencies if they do pay ransom, which would help investigators track down the attackers and hold them accountable.

LATEST SITUATION MAP OF THE LIBYAN CAPITAL AND SURROUNDINGS (UNOFFICIAL) 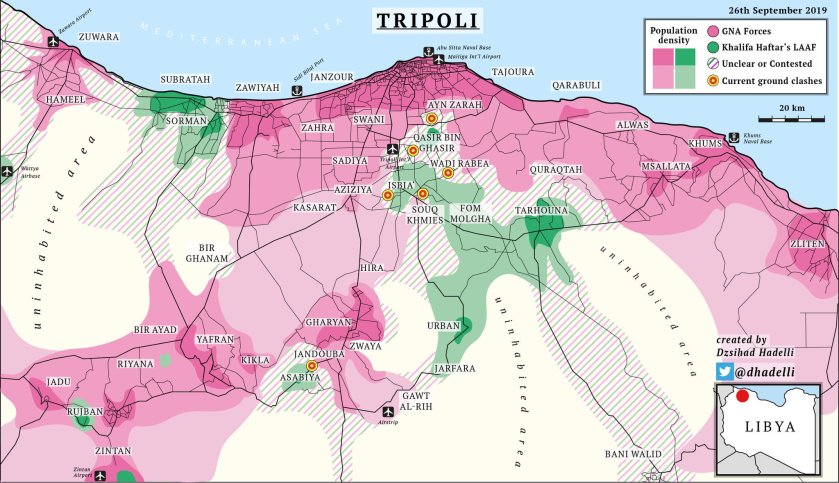 US: SAUDI MAN SENTENCED TO NEARLY 13 YEARS IN FOR CONCEALING ATTENDANCE AT AL QAEDA TRAINING CAMP AND VISA FRAUD

On 3rd October, a news release from US Immigration and Customs Enforcement advised that a Saudi man, Naif Abdulaziz M Alfallaj, 35, who is a former Oklahoma resident, has been sentenced to nearly 13 years in federal prison for making a false statement to the FBI about his attendance at an al Qaeda training camp in Afghanistan in late 2000, and for visa fraud.

The latest edition of The Intellectual Property Review carries an article published in August saying that, following many years of consultation, negotiation and political horse-trading, far-reaching reforms to the European patent system are close to being implemented.  It says that a new unitary patent (UP) would allow patents to be obtained in Europe with a degree of pan-European scope. In parallel, the new Unified Patent Court (UPC) would enable UPs to be enforced across much of Europe on a one-stop-shop basis.  Existing European patents would also be within its remit.

Previously published by the FATF-style regional body, APG, these follow-up reports have now appeared on the FATF website.

On 3rd October, HK TDC reported that Argentina recently expanded its Authorised Economic Operator programme to incorporate customs brokers, customs transport agents and road transport shippers linked to foreign trade.  Earlier this year Argentina revamped its AEO programme in line with WCO parameters in an effort to modernise this scheme and facilitate the signing of mutual recognition agreements with the customs authorities of other countries.

Tax News on 4th October reported that the amnesty will enable qualifying taxpayers to regularize their tax affairs without being subject to interest, fines, or surcharges, providing payment is made by the end of November.  Lesser reductions will be available until February 29th, when the amnesty will be withdrawn.

On 4th October, Finance Magnates reported that the French watchdog, the Autorité des Marchés Financiers (AMF), has shed light on several unregulated ‎binary options brokers representing their offering under several brands.  The blacklisted businesses have been providing professional ‎investment services to domestic clients without proper authorisation, which is a criminal offence.  It has produced a list of recently-identified names.

On 4th October, the BBC reported that Edward Putman, 54, claimed he had found the winning ticket under a seat in his van in 2009 just before the deadline to claim the win passed.  But St Albans Crown Court heard he was helped by Camelot insider Giles Knibbs who knew how to cheat the system.

On 4th October, OCCRP published an article saying that the country has launched the application process for its Citizens by Investment Program, otherwise known as the Golden Visa scheme, which offers rich foreigners and their families citizenship in return for investments worth hundreds of thousands of euros.  It said it expects to raise €1 billion from the programme by the end of 2021.

The Flemish Peace Institute has published a comprehensive analysis of the guns used in public mass shootings in Europe between 2009 and 2018.  It notes that the perpetrators themselves legally obtained about half of the identified firearms that were used. These firearms (which include pistols, revolvers, semiautomatic rifles and a shotgun) were purchased using the required permit or licence, sometimes specifically for sport shooting – and that some of the perpetrators who legally owned the firearms they used in the shootings had mental health problems, often of a long-term nature.  However, perpetrators illegally obtained the few automatic firearms used in these non-terrorist shootings.  Given that firearms of this type are “prohibited weapons” in Europe, it is very difficult to acquire them legally.

King & Spalding published an article on 3rd October saying that recent debarments of contractors by the World Bank underscore the need for entities working under multilateral development bank contracts to implement effective anti-corruption project finance mitigation strategies and to prepare themselves to defend against audits and debarment actions.

On 4th October, Accountancy Daily reported that there has been a 13% drop in the number of reports submitted by accountants to the Solicitors Regulation Authority (SRA) about failings in how lawyers handle client money over the past year.  It is said that the NCA has identified law firms as being particularly vulnerable to being exploited by money launderers, so this is likely to be an area of intensive focus by the SRA over the next few years.  It mentions that the SRA has also issued revised guidelines on the definition of serious breaches of the SRA accounts rules.  The SRA has now begun a further review of 400 law firms to check compliance with the new regulations. This review will be led by a dedicated AML unit, which has been set up to strengthen resources to prevent and detect money laundering.

A post on the FCPA Blog on 4th October reported that in a recent filing with the SEC, Manchester United plc described its relentless international expansion and the risks consequently faced from the Foreign Corrupt Practices Act, the UK Bribery Act, and similar anti-corruption laws.

On 4th October, American Shipper reported on a recent US Governmental Accounting Office report which found that Treasury, State and Commerce Departments, which administer US economic sanctions, lack the ability to definitively measure their effectiveness.

On 29th September, The Independent reported that shipping companies have spent billions rigging vessels with “cheat devices” that circumvent new environmental legislation by dumping pollution into the sea instead of the air.  It said that more than $12 billion has been spent on the devices, known as open-loop scrubbers, which extract sulphur from the exhaust fumes of ships that run on heavy fuel oil.  This means the vessels meet standards demanded by the IMO that take effect on 1st January.