KYC 360 on 6th May reported that Venezuela’s central bank has begun using piles of cash rather than electronic transfer to sell foreign exchange to local banks, according to sources.  Foreign banks have become increasingly unwilling to carry out Venezuela-related transactions amid a raft of US sanctions.

US LIFTS SANCTIONS ON PDVSA-OPERATED REFINERY IN CURACAO

On 6th May, Kallanish Energy reported that Refineria Isla Curaçao, operated by Venezuela’s state-owned PDVSA in the Dutch island of Curaçao, has been granted a waiver from US sanctions.

SOLICITORS FAILING TO STOP ‘DIRTY MONEY’ FLOODING INTO THE UK AND VULNERABLE TO CYBER-ATTACKS? IS THIS CRITICISM FAIR?

An article in the Law Society Gazette on 6th May poses this question.  Amongst other things, it points out that new account rules coming in this November will allow greater use of third-party managed accounts (TPMA), giving all firms the option to avoid the exposure that client accounts – though the author says that there was scant interest in TPMAs among delegates at a Law Society summit.  Also coming into effect in November are separate codes of conduct for firms and solicitors – and the article asks could changes being made increase the risks to firms associated with fraud and other misconduct?  There is also a quote that increased awareness of the risk of commercial property as a vehicle for money launderers exists following the introduction of Unexplained Wealth Orders in January 2018.

The Trinidad & Tobago Journal on 5th May reported that the gov­ern­ment will seek to push 2 pieces of leg­is­la­tion in the com­ing weeks to al­low the State to re­cov­er prop­er­ties and oth­er as­sets from for­mer At­tor­ney Gen­er­al Anand Ram­lo­gan and Sen­a­tor Ger­ald Ramdeen – and to push amend­ments to the Reg­is­tra­tion of Deeds Bill and have the option of using Un­ex­plained Wealth Or­ders in re­spect of the Civ­il As­sets Bill.  Neither men have yet been convicted and are on bail.

On 6th May, the Irish Times carried an article reporting the opening of a case in Connecticut, in which a US bankruptcy trustee claims that tens of millions of euro in property and other assets, including Ireland’s most expensive house were fraudulently transferred to the wife  – Gayle Killilea – of the developer – Sean Dunne – and concealed in her name.  Dunne has admitted he transferred €100 million or about a fifth of his fortune when he was at his wealthiest to his wife but that the transfers took place at a time when he was solvent and had adequate capital.  It has been alleged that the Dunnes operated a long-running scheme to conceal assets from him and creditors “through the use of shell companies, trusts and other straw men” to move assets and change the ownership of assets in the US, Ireland, continental Europe, the Isle of Man, Cyprus and South Africa.  It reports that Dunne was a high profile casualties of the 2008 property and banking crash and has been embroiled in bankruptcy proceedings in both Ireland and the US since 2013.  He owes more than €700 million, mostly to Nama (the Irish National Asset Management Agency), which acquired his business’s property loans.

EU AND US PRESSURE ANKARA OVER ‘ILLEGAL’ DRILLING OFF CYPRUS

EurActiv on 6th May reported that Brussels and Washington have put pressure on Turkey not to proceed with its decision to start exploratory drilling for oil and gas off Cyprus, and to respect the sovereign rights of Cyprus in its exclusive economic zone and refrain from any “illegal action” to which the EU would respond appropriately.

HKTDC on 6th May reported that the General Administration of Customs (GAC) has been designated as the administrative department with overall responsibility for implementing the Kimberley Process Certification Scheme throughout China.

NEW ZEALAND: MAN IN COURT OVER SALE OF VINTAGE AIRCRAFT

Radio New Zealand on 6th May reported that a vintage aircraft expert who worked for Sir Peter Jackson (of “Lord of the Rings” fame) faces fraud charges over the sale of 3 First World War-era reproduction planes – and unauthorised use of a vintage aircraft as security to obtain a loan.

BOOKKEEPER WORKING FOR SILVERSEA CRUISES ACCUSED OF STEALING A$3.5 MILLION FROM ULTRA-LUXURY CRUISE COMPANY IN “DELIBERATE AND CALCULATED FRAUD”

Stuff on 6th May reported that a bookkeeper working for Silversea Cruises has been accused of stealing A$3.5 million (NZ$3.7 million) in an allegedly “deliberate and calculated fraud” said to have been perpetrated over 4 years in its Sydney office.

F-35 COMPONENTS THAT ARE PRODUCED BY TURKEY

The Wall Street Journal on 3rd May reported that Exxon Mobil is suing 2 Cuban companies – Corporación Cimex S.A. and Unión Cuba-Petróleo – in a US federal court under a newly-revived provision in the Helms-Burton Act that permits legal action by US citizens or entities against companies doing business on property that was confiscated by the Cuban government.  It is alleged that property, including oil refineries and service stations owned by an Exxon Mobil predecessor company owned b seized in 1960 by the Castro government.  Exxon Mobil is hoping to recover about $280 million in losses associated with the property.  Exxon Mobil essentially inherited the claim of ownership on the Cuban property from Standard Oil, according to the complaint.  Standard Oil is a predecessor to Exxon Mobil.

On 6th May, Defence Web claims that Airbus is considering suing the German government as its freeze on arms exports to Saudi Arabia means the company is unable to complete a border security system for the country.

On 6th May, the Toronto Star reported that the Great Canadian Gaming Corporation takings had declined as AML rules curb high-stakes play.  It reported a table drop of 12%.

On 6th May, a news release from the DoJ announced that Malaysian national, Ng Chong Hwa, 46, (aka “Roger Ng”) has been extradited from Malaysia to the US to face charges of conspiring to launder billions of dollars embezzled from 1Malaysia Development Berhad (1MDB), Malaysia’s investment development fund, and on Foreign Corrupt Practices Act (FCPA) charges.

TAIWAN FUGITIVE WANTED FOR FRAUD ARRESTED IN THE PHILIPPINES

Focus Taiwan on 6th May reported that a Taiwanese fugitive named Huang and wanted for fraud has been arrested in the Philippines after he tried to flee the country using a fake Philippine passport.  He was the leader of 110 Taiwanese fraud suspects who were caught running a scam in Latvia in 2017.

Gulf News on 4th May reported that the pills were hidden in a foodstuff container sent to the emirate from an unnamed Arab country at the Jebel Ali and Tecom Customs Centre.  The article explains that Captagon (fenethylline) was initially produced in the 1960s as a treatment for attention deficit hyperactivity disorder (ADHD) but was later banned in the 1980s due to its highly addictive nature.  While commercial manufacturing of the drug has ceased, illegal manufacturing practices continue, combining several highly addictive stimulants that compound the destructive effects of Captagon’s amphetamine and theophylline co-drug combination.

Newsbook on 5th May reported that Malta’s record number of drug hauls is thanks to its €2.5 million investment at the Freeport last year, according to its Minister for Finance.  There was new scanning equipment and a specialised Canine Unit at the Freeport Terminal.

IRELAND: MORE SCRUTINY OF COMPANY OWNERSHIP IS ON THE WAY

Insight Crime on 6th May reported about a new investigation by Colombia’s Attorney General’s Office.  Prosecutors investigated alleged suppliers of illegal gold, including C.I.J. Gutiérrez, one of the country’s largest gold companies based in Medellín, and which is alleged to have created a ring of suppliers engaged either as fronts or as moving large quantities of illicit money.

On 3rd May, Latham & Watkins published a briefing about the US decision to allow US businesses to sue for lost Cuban property under Title III of the Helms-Burton Act.

A news release from the Office of the UN Human Rights Commissioner says that an independent expert appointed by the Human Rights Council has expressed deep concern at the recent imposition of unilateral coercive measures on Cuba, Venezuela and Iran by the US, saying the use of economic sanctions for political purposes violates human rights and the norms of international behaviour.  Such action, it says, may precipitate man-made humanitarian catastrophes of unprecedented proportions.  His statements follow claims in a recent report published by the Washington-based Centre for Economic and Policy Research that 40,000 people may have died in Venezuela since 2017 because of US sanctions.

On 3rd May, FinCEN issued an updated Advisory (updating the last one of September 2017) to alert financial institutions of continuing widespread public corruption in Venezuela under the regime of Nicolas Maduro.  It also alerts financial institutions to additional methods utilized by corrupt Venezuelan senior political figures (and their associates, family members, and front persons) to move and hide corruption proceeds.  The information includes details of misuse of Venezuela’s government-sponsored food distribution program:  Los Comités Locales de Abastecimiento y Producción (“Local Supply and Production Committees”), commonly referred to as the “CLAP program”.  FinCEN has identified trade-based money laundering as a primary mechanism used by high-level, corrupt Venezuelan senior political figures, their family members, and associates to evade sanctions and facilitate the movement and laundering of proceeds related to corruption, fraud, and embezzlement, including to divert Venezuelan government funding for the CLAP program into their own accounts – with the use layered international wire transfers, over-invoicing methods, front and shell companies across multiple international jurisdictions, and nested accounts in foreign-denominated currency to divert illicit gains into personal accounts.  Many of these front and shell companies and their nested accounts are, it says, located in jurisdictions whose corporate formation regimes and financial sector offer limited transparency that impedes AML/CFT controls.  The Advisory lists a number of “red flags” for Venezuelan government corruption. 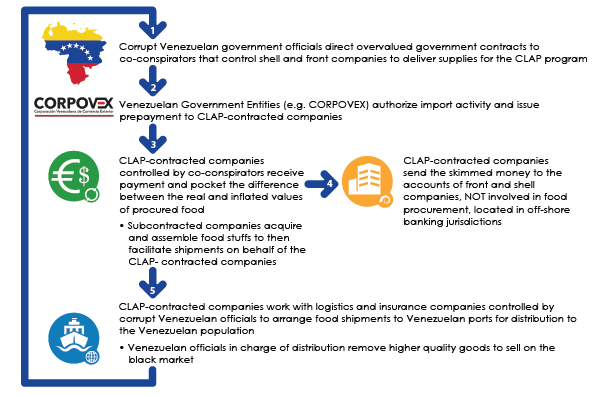 On 3rd May, Kingsley Napley published an article about this Bill which seeks to establish a beneficial ownership register of overseas entities that own property in the UK.

A news release on Mondo Visione on 6th May reported that NGO Global Witness has exposed how a lack of checks on company owners – known as People with Significant Control (PSC) – by Companies House and enforcement of rules mean criminals can continue to exploit loopholes and submit false information with impunity.  Global Witness analysis also uncovered thousands of companies associated with red flags for money laundering and other financial crime.  336,224 companies simply say they have no beneficial owner; 6,711 companies are controlled by a beneficial owner who themselves control over 100 companies (suggesting that these individuals could be nominees); 8,872 companies name another foreign company as their ultimate owner, which is unlikely to meet the requirements; and 487 companies are part of circular ownership structures, where they appear to control themselves.  In addition, it found that 2,083 company owners are disqualified directors; 1,519 company officers or PSC are politicians (i.e. likely PEP); 136,682 officers or PSC are based in “secrecy jurisdictions” (e.g. BVI); and 228,295 companies are registered at a company factory or mailbox address, with little or no connection to the actual place of business or owner.

On 3rd May, the Current Awareness website from Inner Temple Library provided a link to a speech by Sir Geoffrey Vos, Chancellor of the High Court, which he gave to the Joint Northern Chancery Bar Association and the University of Liverpool Lecture.  He asks why smart contracts have taken so long to become ubiquitous.  He concludes that there needs to be an identification of whether cryptoassets are, or are not, property under English law – and, if they are not, a quick and simple legislative approach needs to be considered.