Swissinfo on 31st March reported that authorities in Switzerland are considering legal proceedings after failed diplomatic efforts to secure the release of a Swiss-flag-carrying oil tanker, blocked in the bay of Biafra for over a year.  The San Padre Pio oil tanker, registered by ABC Maritime, was seized by Nigerian authorities in January 2018, who accused the ship and its crew of violating territorial waters and diesel smuggling.

On 1st April, Scoop reported an FMA news release saying that the FMA had released AML/CFT monitoring report setting out the areas requiring further attention by the management and boards of the reporting entities it supervises.  The FMA is one of 3 supervisors for AML/CFT in New Zealand, alongside the Reserve Bank of New Zealand and the Department of Internal Affairs.  Amongst the issues raised is that an increasing number of entities are using electronic identify verification, but the FMA noted a number of deficiencies with their AML/CFT programmes in this regard.  It also said that when undertaking operational reviews, the FMA will focus more on front-line staff who perform tasks such as client on-boarding, to assess their understanding of the obligations.

MALTA: OPPOSITION LEADER ASKS FOR INVESTIGATION INTO HIS “FORGED” SIGNATURE ON DOCUMENTS AND ASKS IF LINKED TO MONEY LAUNDERING PROBE

On 1st April, the Times of Malta reported that opposition leader, Adrian Delia, went to the FIAU with documents which he says had his forged signature and asked them to investigate whether the documents were in any way linked to the findings of a money laundering probe, of which he was the subject last year.  It is reported that in 2018 the FIAU had concluded there was reasonable suspicion that he had been involved in laundering the proceeds of a London brothel back in the early 2000s which had been deposited in an account in Jersey.  Reports had linked Delia to the company said to have run the brothel, as well as others linked to the man said to be behind the operation.

On 31st March, Money Control reported that the 2016 removal of 2 high-value currency notes has led to an all-time high number of suspicious activity reports, a record 1,400% jump over the pre-demonetisation period, by banks and other financial institutions in the country, according to a FIU report.

The Salon website on 29th March reported on an investigation into the data by Victor Galaz and colleagues from the Stockholm Resilience Center.  It says that they were most interested in the environmental consequences of the global financial system.  They used publicly available data from INTERPOL and other sources to uncover how secret financial dealings fuel 2 major conservation threats: overfishing in the world’s oceans and deforestation of the Brazilian Amazon.  It says that illegal, unreported, and unregulated (IUU) fishing is a serious cause of declining fish populations worldwide, and criticises Belize, Panama, and many other tax haven countries.

FUGITIVE TYCOON TO CHALLENGE HONG KONG’S EXTRADITION PLANS
Channel News Asia on 1st April reported that Joseph Lau is set to launch a legal challenge against Hong Kong’s controversial plan to sign an extradition agreement with Macau, Taiwan and mainland China.  Hong Kong property tycoon Joseph Lau is wanted in Macau where he was convicted in absentia for bribery in the gambling enclave in 2014.  He remains a free man because Hong Kong and Macau do not currently have an extradition agreement.

A news release from the Gibraltar Government on 29th March sets out to explain the effect of a No-Deal exit from the EU on the handling of civil legal cases involving other EU jurisdictions.  It covers rules such as those concerning applicable legislation in cross-border civil and commercial disputes, cross-border insolvency proceedings and matters of family law.

A news release from Europol on 30th March reported that the Spanish National Police have dismantled the most active counterfeit euro print shop in Spain with the support of Europol. The specialised crime ring, based in Tenerife, manufactured fake banknotes in €10 and €20 denominations, earning the gang around €7,500 every month.

On 28th March, the International Federation of Freight Forwarders Associations (FIATA) issued “Best Practice Guide on Prevention of Cybercrime” for FIATA members and the industry at large.

WHAT IS GOING ON IN LIBYA?

An article from War on the Rocks on 1st April looks at the situation in Libya, including the links between Libya’s petrodollars, the feuding factions, and the foreign states backing them.  It says that Earlier this year, the armed coalition led by eastern-Libyan-based commander Khalifa Haftar seized an oil-rich desert expanse 3 times as large as Syria called the Fezzan.  There is now speculation on whether he will attempt to take the capital, Tripoli.  Haftar has not recognised the UN-backed Government of National Accord in Tripoli, and its prime minister and his cabinet co-exist with a set of powerful militias there, but do not control them.

EUROPEAN BORDER AND COAST GUARD: COMMISSION WELCOMES AGREEMENT ON A STANDING CORPS OF 10,000 BORDER GUARDS BY 2027

On 1st April, a news release from the EU said that the EU Council has approved the political agreement reached to reinforce the European Border and Coast Guard, giving it the right level of ambition to respond to the common challenges Europe is facing in managing migration and borders.  The centre piece of the reinforced Agency will be a standing corps of 10,000 border guards – ready to support Member States at any time.

A news release from the EU on 1st April announced that North Macedonia, Montenegro, Serbia Albania, Bosnia and Herzegovina, Iceland, Liechtenstein, Norway and Armenia have aligned with EU sanctions which the EU has extended to 20th February 2020.

UK: EMPLOYING EU, EEA AND SWISS CITIZENS AND THEIR FAMILY MEMBERS AFTER BREXIT

On 1st April, the Home Office issued updated information for employers on “right to work” checks and the immigration status of EU, EEA and Swiss citizens and their family members working in the UK after Brexit.  It says that there will be no change to the way EU, EEA and Swiss citizens prove their right to work until 1st January 2021.  This remains the same if the UK leaves the EU without a deal.

On 1st April, Arab News said that Algerian authorities have seized the passports of 7 businessmen under investigation over corruption allegations, the private Ennahar TV channel reported.

On 1st April, Malta Today reported the Finance Minister’s complaints that leaked extracts from an ongoing Moneyval evaluation process claimed that Malta has failed the initial test of its AML systems.  Sources told the Times of Malta that, in the last evaluation, out of 11 measures of effectiveness graded (known as “IO”) – ranging from international cooperation to local supervisory functions and policing – none were considered good enough to score a “high”.  The minister said that that it was unfair that, due to the leak, the evaluation process had to be stopped in the middle, while, in other countries, it is allowed to take its due course.

OCCRP on 1st April reported that Gambia’s official inquiry into the corruption of former President Yahya Jammeh found he had looted at least $363 million of public funds during his more than 2 decades in power.

Baker McKenzie on 1st April reported that Pakistan has announced plans to regulate cryptocurrencies in accordance with recommendations of FATF.  The regulations will be introduced immediately.

On 1st April, Baker McKenzie published a very good briefing that sets out some of the main sanctions and export controls issues arising from a no-deal Brexit which are likely to impact upon companies operating in the UK and EU, and provides guidance on what companies can do to prepare for this eventuality.

On 1st April, a report from Global Witness said that millions of tonnes of timber enters China every year, with its vast wood manufacturing sector dependent on raw materials from overseas.  But much of that timber comes from countries where corruption and weak rule of law is leading to high levels of illegal logging.  The country’s exposure to high-risk timber is damaging to its own and its trading partners’ long-term development.  It is time, it says, for China to take responsibility for this, step up to this global challenge and lead the way on tackling the spread of illegal timber.  It says that most of the 10 largest suppliers of tropical timber to China rank in the bottom quarter of global ranking on measures of governance.  Not only this, but the research we have compiled shows widespread and worrying levels of illegalities in countries from which China sources over 80% of its tropical timber.  The report lays out a range of recommendations, outlining action China could take. 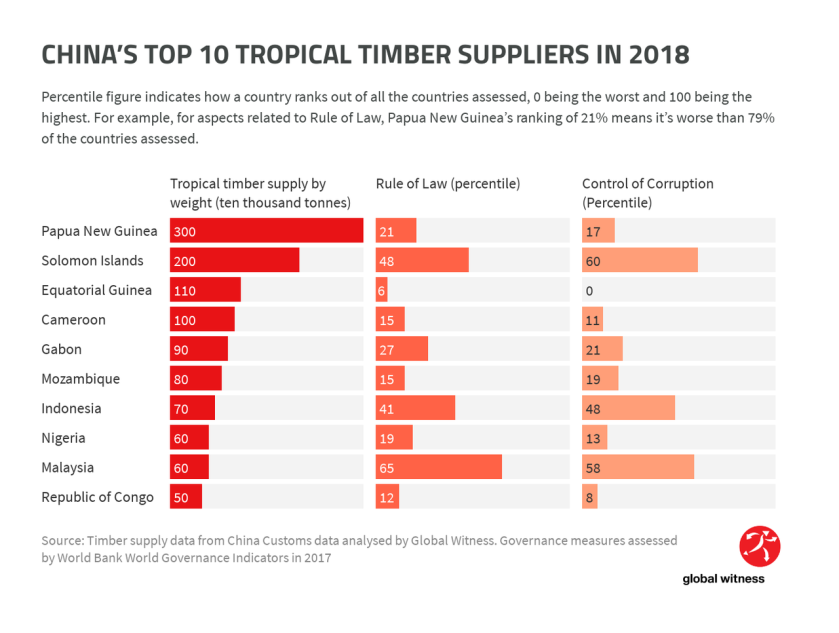 On 1st April, Malta Today reported that the government has authorised the publication of a report on Malta drawn up by the Council of Europe’s Group of States against Corruption (GRECO), the Justice Ministry said.  The government faced criticism for not having agreed to the publication of the report, which was leaked at the weekend.

Following publication of the MER on the Cayman Islands, FATF issued an updated schedule of consolidated ratings on 1st April. 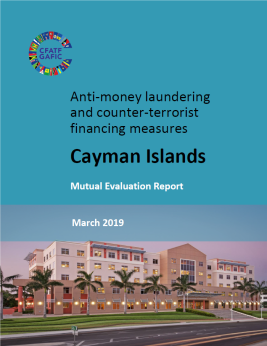 On 1st April, FATF published the mutual evaluation report on the Cayman Islands prepared by the regional FATF-style body, CFATF.  The on-site visit for the evaluation took place in December 2017.  The report says that there are some important deficiencies within the technical compliance framework.  Shortcomings in the area of simplified measures, reliance on third parties, higher risk countries inter alia, represent deficiencies that have the potential to weaken the jurisdiction’s AML/CFT regime from meeting expectations standards if left unaddressed.  Some deficiencies identified in technical compliance are considered serious, and lack of adequate implementation in some cases were considered major shortcomings in effectiveness. 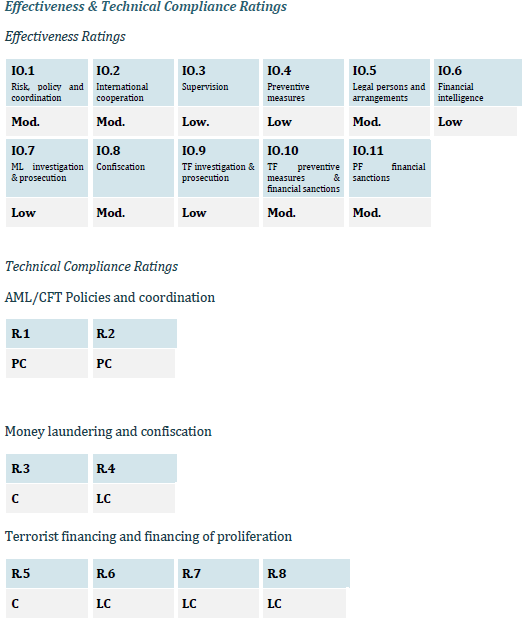 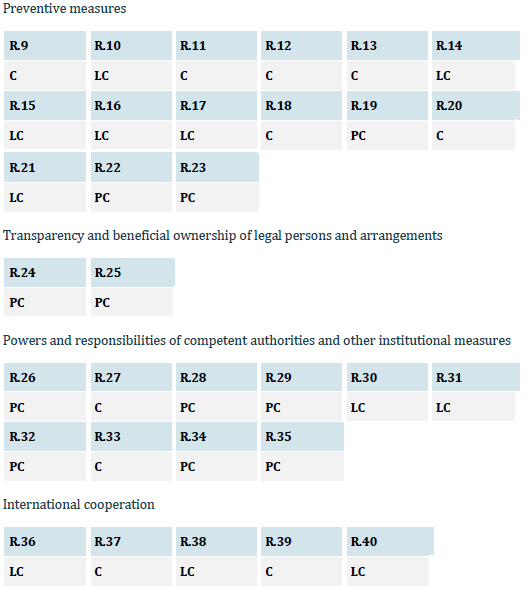 In an article dated 1st April about the settlement between OFAC and Stanley Black & Decker Inc and its foreign subsidiary, Jiangsu Guoqiang Tools Co Ltd, Wilmer Hale said that the enforcement action and ensuing settlement agreement are particularly notable for 2 reasons –

The article says that the enforcement action is also consistent with the general increase in the ratio of OFAC enforcement actions against non-financial institutions.7 We expect that these trends will continue in 2019, particularly in the context of the US escalation of pressure on Iran and parties that transact with Iran.