A news release from the US Treasury on 22nd March announced that OFAC had designated 14 individuals and 17 entities in connection with Iran’s Organization of Defensive Innovation and Research (SPND), which it said has provided support to designated Iranian defence entities and whose key personnel played a central role in the Iranian regime’s past nuclear weapons effort.   This action targets current SPND subordinate groups, supporters, front companies, and associated officials.  It includes the Shahid Chamran Group, the Shahid Karimi Group, and the Shahid Fakhar Moghaddam Group (Shahid Fakhar); as well as 3 key SPND front and cover companies – Pulse Niru, Kimiya Pakhsh Shargh (KPS), and the Paradise Medical Pioneers Company (PMP).

The Mutual Evaluation report on Colombia, produced by the regional FATF-style body GAFILAT is available online.

The report from GAFILAT, the regional FATF-style body, on Peru is available online. 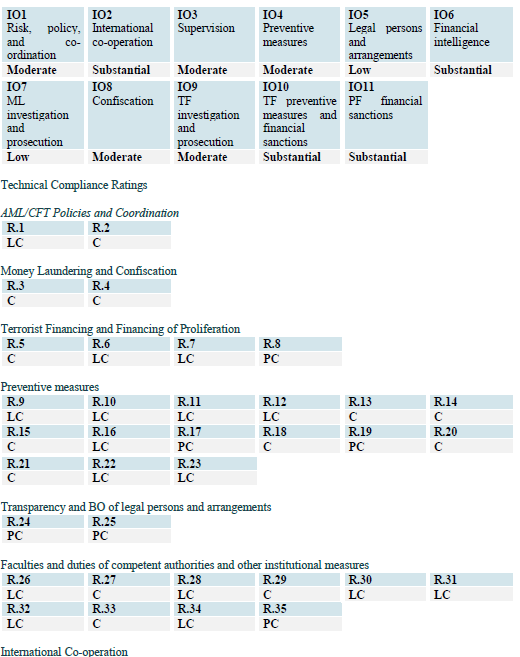 In March 2019, an interdepartmental working group in Ireland produced a report that suggested the regulator should also be tasked with monitoring gambling marketing, maintaining sports integrity and banning betting inducements such as issuing credit to customers for gambling purposes.  The report also suggested the regulator consider imposing daily, weekly and monthly spending limits for gambling.  It calls for a comprehensive reform of all legislation relating to the licensing and regulation of all gambling activities

On 22nd March, Accountancy Daily reported that the OECD’s Global Forum on transparency and exchange of information for tax purposes has released the first-ever beneficial ownership toolkit designed to help governments, particularly in developing countries, comply with international transparency standards.  The focus is said to be on the standards ensuring that law enforcement officials have access to reliable information on who the ultimate beneficial owners are behind a company or other legal entity so that criminals can no longer hide their illicit activities behind opaque legal structures.  The toolkit, prepared in partnership with the Inter-American Development Bank, was developed to support global forum members and in particular developing countries.  The toolkit contains policy considerations that Global Forum members can use in implementing the legal and supervisory frameworks to identify, collect and maintain the necessary beneficial ownership information.

The toolkit itself is at –

The Nassau Guardian on 22nd March reported that the Financial and Corporate Service Providers (AML/CFT) Rules, 2019 and the Securities Industry (AML/CFT) Amendment Rules, 2019 were tabled in the House of Assembly 1 month after the Bahamas was added to the EU list of jurisdictions having strategic deficiencies in its AML/CFT regime.  The rules for financial services providers call for a risk rating framework which, among other things, is designed to establish KYC and due diligence information requirements; require the appointment of a compliance officer and a MLRO; and require that financial and corporate service providers develop clear procedures and controls for the verification of a PEP.

EU Regulation 2019/459/EU from 23rd March replaces Annex I to Regulation 270/2011/EU, which contains the list of those subject to sanctions, being supplemented with information regarding the rights of defence and the right to effective judicial protection.

On 22nd March, a news release from HMRC contained updated information (adding information about transporting and delivering tobacco products from a vending van) on what you will need to do if you transport or transload tobacco products in the EU.  From 20th May, all unit packets of cigarettes and hand rolling tobacco manufactured or imported in the EU (except existing stock in hand) must have unique identifiers (UID) on the packaging, have 5 specific security features on the packaging, and be scanned at certain points in the supply chain.  From May 2024, this will apply to all products containing tobacco.  Essentially, you need to scan tobacco products when you ‘transload’ them – move them from one vehicle to another.  If you transport products only and do not move them between vehicles, you do not need to scan them.

On 21st March, a good article in the New York Times starts by saying that sophisticated surveillance, once the domain of world powers, is increasingly available on the private market.  Smaller countries are seizing on the tools — sometimes for darker purposes.  The Saudi government’s reliance on a firm from Israel, an adversary for decades, for its surveillance activities – as revealed in the Jamal Khashoggi affair offers a glimpse of a new age of digital warfare governed by few rules and of a growing economy, now valued at $12 billion, of “spies” for hire.  The article concerns an investigation undertaken by the newspaper.  It says that NSO of Israel, and a competitor, the Emirati firm DarkMatter, exemplify the proliferation of privatised spying.  The firms have enabled governments not only to hack criminal elements like terrorist groups and drug cartels but also target activists and journalists.  The FBI is said to be investigating current and former American employees of DarkMatter for possible cybercrimes.  The Middle East is said to be the epicentre of this new era of privatised spying.  NSO helped the Saudi government track its adversaries outside the kingdom, and helped the Mexican government hunt drug kingpins.  Mexico is also said to have used the software as part of a broader government and industry surveillance effort – to track at least 2 dozen journalists, government critics, international investigators looking into the unsolved disappearance of 43 students, even backers of soda (sugar) tax.  Targets were subjected to a stream of harassing text messages that contained malware – some messages warned that their spouses were having affairs, others that a relative had passed away.  In one case, when government officials were not able to infiltrate the phone of a journalist, they targeted her 16-year-old son’s.  In 2017, a former US NSA hacker began providing FBI agents with information about DarkMatter’s activities as a whistleblower.  The article then refers to the political and legal (i.e. outdated legislation) problems for US law enforcement in dealing with such as DarkMatter.

On 21st March, Clyde & Co published a briefing saying that the “CumExFiles” were released mid-October 2018. CumExFiles is the project name for a joint investigation by 19 European media outlets from 12 countries, co-ordinated by the German non-profit newsroom CORRECTIV.  The investigation involves dividend arbitrage transactions and associated tax evasion (by double claims of tax relief by more than one tax payer).  It explains “cum/ex” trading (aka dividend stripping) to be that which involves the acquisition of real or synthetic shares just before the dividend (cum-dividend), and then selling the shares after the dividend record date (ex-dividend).  The trades are conducted quickly meaning tax administrations struggle to identify the shares’ real owners, allowing both parties to claim tax rebates on capital gains tax that had only been paid once.  3 parties are usually on the transaction – the owner of the stock, the bank or stockbroker which borrows the stock and sells it short, and a third party that buys the stock shortly before dividend day. The 3 parties often share the proceeds of the extra tax refund between them.  The tax loophole that allowed it was eventually closed in Germany in 2012.  It says that, from the UK point of view, the UK has, thus far, not been directly implicated in CORRECTIV’s investigation.  However, in June 2017, it raised the risk that some firms may have become involved in potentially contrived transactions created in order to support fraudulent withholding tax reclaims”. This, the FCA says, is potentially criminal, and could also amount to market abuse.