On 10th January, The Independent online newspaper website carried a guest article which argues that the most effective response to money laundering has been co-operative action, commonly organised at the European level, but that Brexit moves the UK in the opposite direction, isolating it from neighbouring states and, as such, weakening its defences against illicit transactions.  This weakness will attract criminals, and the UK risks becoming the preferred locale for such criminal activity.  It is likely to leave Europol and lose access to the Europol Information System (EIS), which collates the national databases of all Member States, making them searchable by all Europol members.  It also argues that the UK’s proximity to the EU and its existing financial relationships suggests that the UK may have to adopt EU standards, as European-wide compliance will be necessary for post-Brexit interaction. However, as with most other EU-related matters, the UK will no longer be in a position to influence them.

On 10th January, the House of Commons Library published a briefing which explains how audit works, the problems the industry faces and how it is being reformed.  Accounting and audit failures periodically turn the spotlight on a range of problems with the industry, and the audit of large companies in particular, and momentum for reform has gathered pace.

Commercial Motor on 10th January reported that a haulage company boss who was caught smuggling 2,000 kg of hand-rolling tobacco into the UK, evading £442,360 in duty, has been jailed for 18 months.  Attila Tanko is owner of the Hungary-based Chariots of Fire KFT haulage company.

On 11th January, Calvin Ayre reported that Google has begun complying with Russian rules on blocking undesirable material — including internationally licensed online gambling sites — from its search engine results.  Russian law requires internet giants like Google to connect to the federal state information system (FGIS) to monitor the Unified Register of Prohibited Information, so that blacklisted domains will be automatically blocked from appearing in Russian search results.

Ekklesia on 11th January reported that Transparency International Portugal is calling on the Ministry of Home Affairs of Portugal to immediately release information on its controversial residency-by-investment, the so-called ‘Golden Visa’ programme – as the parliament discusses a Bill which, if adopted, would terminate the Golden Visa scheme, and the Government has committed to review the Golden Visa programme but has not yet begun to do so.

US BLOCKS SOME EXPORTS FROM HUAWEI’S SILICON VALLEY UNIT

On 17th December, ETH Zurich published an edition of its Russian Analytical Digest, in which the author examines Russian public narratives about foreign policy – and highlighting a shift in 2004, after which China has been depicted more positively and the US more negatively.  She also investigates how government and opposition media have represented the sanctions regime imposed on Russia in recent years.

EU Observer on 11th January reported that over €6 billion of EU taxpayers’ money was stolen by criminals in recent years and over €130 million is still being lost each year, the EU Court of Auditors have warned.

CNN on 11th January reported that the head of the Japanese Olympic Committee (JOC) Tsunekazu Takeda was placed under formal investigation in Paris in December for corruption.  The investigation relates to the bidding process and a suspect payment of €1.8 million that was made around the announcement that Tokyo was to host the 2020 Olympics.

EUROPE AND IRAN: THE ECONOMIC AND COMMERCIAL DIMENSIONS OF A STRAINED RELATIONSHIP

On 11th January, ETH Zurich published a briefing which asks to what extents has the EU delivered on the economic side of the nuclear deal with Ira, and it be able to shield the nuclear deal and future business with Iran from the impact of Washington’s re-imposed and strengthened sanctions?  It says the situation poses an enormous challenge for the EU, which had intended to use the 2015 JCPOA agreement as a stepping stone to promote regional cooperation and, ultimately, a more comprehensive relationship with Iran.

Customs Today reported on 10th January that stolen vehicles from Australia and New Zealand have been seized in what it describes as “a big car racket”.  The Fiji Revenue and Customs Service intercepted the vehicles imported by agents here to be resold.  They were misdescribed under the guise of spare parts and furniture.  Similar interceptions of Australian cars were made in 2018.

Law 360 on 11th January reported that French judges are preparing to launch a formal investigation into scandal-hit Danske Bank over approximately €28 million of transactions that potentially violated France’s AML legislation.

An article from Ogier on 11th January says that an increasing number of businesses are concluding that a security token offering (STO) is now the preferred approach to raise funds for their project, product or platform, and which typically links tokens to either profits, assets or both.  An STO therefore offers a token with the promise of a return as opposed to the promise of utility, it says.  The article considers a few of the common questions facing Security Token issuers incorporated or established in the Cayman Islands.

The Times of India on 11th January reported that the gold was found on a Spice Jet flight, a journey that continues on as a domestic, internal flight from its first port of call in India (so less likely to face checks after the first stop). 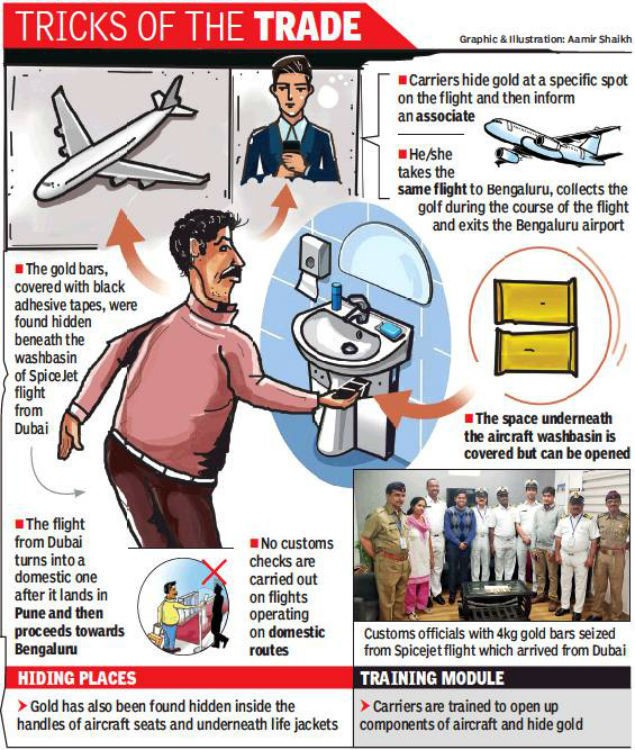 The Malta Independent on 11th January reported that 7.73 million contraband cigarettes were found hidden in a container at the Freeport.  It had arrived from Rotterdam en route for Tunisia.

The BBC reported on 10th January that the haul of 36 horns and horn fragments, worth about $1.3 million, is believed to be one of the biggest seized in the country in recent years.  The 8 boxes were already ready to be shipped to Dubai.

Baker McKenzie on 11th January reported that Georgia’s Chief Prosecutor’s Office has launched a criminal investigation of the country’s second-largest bank, TBC Bank, for alleged money laundering – which the opposition calls an attack on unwanted business institutions.  The case dates back to 2008.

World ECR reported that there are ‘curtailed’ services for licence requests, advisory opinions and commodity classifications ‘except for those that provide direct support to the military, humanitarian aid, or other similar emergencies’; with US and non-US companies are adversely impacted due to OFAC, BIS and DDTC not processing export/reexport license applications and requests for removals from SDN and Entity Lists.

Janes.com on 11th January reported that the Royal Navy will deploy Type 23 frigate HMS Montrose to Japan in early 2019.

Legal Futures on 11th January reported that efforts to encourage lawyers to make more suspicious activity reports (SAR) are not succeeding – the NCA report showing they are 12% down.  Lawyers made just 2,660 of the 463,938 SAR made in 2018.  The vast majority of the legal SAR came from solicitors, with 77 from licensed conveyancers, 9 from barristers and 181 from other legal professionals.  Solicitors made 30 SAR involving terrorist finance.

An opinion piece from US National Public Radio on 10th January claimed that a proposal by the newly elected President to dismantle national gun laws is precisely the wrong way to go about reducing gun violence in Brazil.  On paper at least, Brazil has comprehensive gun legislation, but the law was never fully enforced, with instead Brazilian authorities adopting a fragmented approach to controlling firearms.  Now a core goal of President Bolsonaro and the lobbyists is to liberalise gun laws and expand citizens’ right to carry firearms on the street.

On 9th January, a report from the Center for Strategic and International Studies which, in co-operation with Vulcan, Inc, unveils a worrying narrative about the impact fishers and their fleets have in the region – has emerged as one of the most dangerous flashpoints in the Indo-Pacific over the last decade; and with China’s expansion and militarization of its holdings in the disputed Spratly Islands from late 2013, tensions have escalated rapidly.  China, Taiwan, Brunei, Malaysia, the Philippines, and Vietnam claim various islands, rocks, and reefs – with a further dispute between these countries and Indonesia, with claimants assert rights to overlapping maritime zones under international law.  The South China Sea accounted for 12% of global fish catch in 2015, and more than half of the fishing vessels in the world are estimated to operate there- but overfishing means stocks have been depleted by up to 95% since the 1950s, and catch rates declined by up to 75% over the last 20 years.  It says that the number of fishing vessels operating in the disputed Spratly Islands is exponentially higher than AIS transmissions suggest (vessels, particularly Chinese, usually switch off AIS, and the report was compiled using other sources of data as well). Improving the monitoring of these fleets will be critical if the claimants hope to save the South China Sea fisheries and reduce the frequency of unlooked-for incidents between vessels.  However, the article also highlights that a different kind of fishing fleet, one engaged in paramilitary work on behalf of the state rather than the commercial enterprise of fishing, has emerged as the largest force in the Spratly Islands.

Alert 5 reported a Swissinfo story from 10th January that, because of Saudi’s involvement in the Yemen conflict, the Swiss contract to maintain turboprop trainer aircraft could put into question the country’s neutrality obligations, and may broken Swiss law.  The Swiss foreign affairs ministry is said to have begun a deeper investigation.