NICARAGUA’S ‘HOUSE OF CARDS’ STARS ANOTHER CORRUPT AND POWERFUL COUPLE

As a background to the recently announced US sanctions on members of the controlling regime in Nicaragua, the Miami Herald on 29th November published an article which starts by saying that Nicaragua is a political stage where a real-life “House of Cards” is now in its second season.  President Daniel Ortega and his wife and partner in crime, Vice President Rosario Murillo, have together run the country as an increasingly violent family business for the last couple of years.  Ortega has been continuously in power for the past decade and, all in all, for 4 long terms with no term limits. The next elections are scheduled for 2021.  As well as the sanctions imposed under the Executive Order, Congress has passed the Nicaraguan Investment Conditionality Act (or NICA).

On 15th November, RUSI published an Occasional Paper which reviews the efforts of national authorities to harness the opportunities of data analytics for AML purposes.  It sets out potential methods and their benefits, as well as other factors that should be considered to ensure the proportionality and sustainability of innovative approaches.  Cases reviewed as part of this research illustrate the value of data analytics for AML supervision and enforcement.  It recommends that supervisors, financial intelligence units and relevant law enforcement agencies should adopt a strategy to identify and harness opportunities for the use of data analytics in an AML context; regional organisations such as the EU should foster a dialogue on the different approaches developed in this area by member states, to encourage a harmonised approach; and that assessment bodies such as FATF and the IMF should more systematically review to what extent member countries have considered and harnessed the potential of data analytics for AML intelligence, supervision and enforcement purposes.  It also says authorities should include the private sector.

The Wall Street Journal on 29th November reported that companies based in Singapore, Hong Kong and China helped launder more than $3 million on behalf of blacklisted North Korean banks, US authorities have said in a civil lawsuit they filed, seeking to seize the funds.  The companies were named as Hong Kong-based wax company, Apex Choice Ltd; China-based lumber company, Yuanye Wood Ltd; and an unnamed Singaporean company.  It says such front companies are instructed to strip information tying their dollar transactions to North Korea to prevent the US from blocking them.

Accountancy Daily on 30th November said that the Charity Commission has issued an alert to trustees, employees and volunteers about postal stamp fraud and the risks associated with it.  Stamp fraud involves the preparation, distribution and sale of previously used stamps for reuse. Usually these stamps are sold online, at a lower price than the standard postal service rate.  Anyone knowingly collecting, preparing, distributing, reusing or selling used stamps to avoid paying full postal fees may be committing a form of fraud.  It warns that charities could inadvertently aid this fraud by collecting and selling on used stamps.

Defence Web on 29th November reported that delegates at the recent 43rd Shared Awareness and De-confliction (SHADE) conference have warned that complacency will see a rapid resurgence in the scourge of piracy, especially off the Horn of Africa.  10 years of counter-piracy operations has seen successful outcomes resulting from the partnerships between military navies and commercial shipping working closely together. Key to this success is the bi-annual Shared Awareness and De-confliction.

On 1st December, the Home Office reissued updated the codes of practice under the Police and Criminal Evidence Act 1984, the guidance on rights when detained and rights when having a voluntary interview have been updated.

NJ.com on 1st December reported that one of the founders of the rap group, the Fugees, and a former DoJ employee were accused of opening multiple bank accounts to funnel tens of millions of dollars in funds from overseas accounts controlled by a Malaysian business tycoon.  Prakazrel (“Pras”) Michel and former DoJ official George Higginbotham were indicted.

On 30th November, Morgan Lewis published an article on the report issued by the UK Cryptoassets Taskforce (comprising representatives from the UK government, FCA and Bank of England), in which authorities break down the key concepts of cryptoassets; consider application of the current regulatory perimeter to different cryptoassets; and discuss the impact, risks, and benefits of cryptoassets as well as next steps for regulating this developing sector.

Baker McKenzie on 30th November reported that police in Brazil have arrested the governor of the state of Rio de Janeiro, Luiz Fernando Pezão.  Investigators say Mr Pezão took bribes when he was deputy governor of Rio from 2007 to 2014. He has denied taking any illicit funds.

Clifford Chance has issued a briefing that reports on the new disclosure pilot scheme in the Business and Property Courts of England & Wales being introduced from 1st January, and which aims to address the costs and other burdens of disclosure in civil proceedings.  However, it says, the scheme is complex, and requires disclosure to start much earlier in proceedings than it does at present.  New “Disclosure Duties” have been created for parties and their legal representatives; even where comparable duties already exist.  The pilot scheme, which will run for 2 years, allows the parties and the court to adapt the disclosure to be given in a particular case to make it more bespoke to the case in hand.

The BBC on 30th November reported that the discovery of about 100 kg of cannabis was one of the most significant seizures of drugs by the Police Service of Northern Ireland (PSNI) this year.  It is said that several lines of inquiry are being pursued – one is a potential link to a triad organised crime gang and another is potential links to paramilitary groups.

A news release on Mondo Visione on 30th November reported that the DoJ announced the filing of a civil forfeiture action seeking to forfeit and recover more than $73 million in funds associated with an international conspiracy to defraud US financial institutions and to launder funds controlled by Jho Taek Low, aka “Jho Low,” an individual who is the subject of an indictment alleging that Low and others conspired to launder billions of dollars embezzled from 1Malaysia Development Berhad (1MDB), Malaysia’s investment development fund, and pay hundreds of millions of dollars in bribes to foreign officials, among other things.

WIPR on 30th November reported that South Korean prosecutors have indicted 9 people on suspicion of selling Samsung technology to a Chinese company without authorisation.  The CEO and 8 employees of an unnamed Korean supplier have been charged with selling trade secrets protecting Samsung’s organic light-emitting diode (OLED) panels.

FOREIGNER SMUGGLING ‘COOL CASH’ WORTH N940M OUT OF NIGERIA

My Nation News on 1st December reported that the Economic and Financial Crimes Commission have arrested a Lebanese for money laundering, Abbas Lakis.  The EFCC said in a statement that the suspect was arrested with different foreign currencies.  Lakis was picked up at the Nnamdi Azikiwe International Airport, Abuja, with undeclared huge sums in various currencies (at least well over $2 million) aboard the Egypt Airline taking him en route to Lebanon.

SOME GLASGOW RANGERS SHAREHOLDERS ‘HAVE LINKS TO CRIME’

The Express on 1st December reported that Rangers’ chairman Dave King revealed how 4 people “linked to organised crime” had bought into the club.  He gave the club’s version of the story of the crime ties in court before agreeing to offer up to £19 million of his own money to buy out shareholders by January 25th.  A court had previously ordered King to mount a potential buyout of shareholders following legal action by the Takeover Panel.  The businessman outlined how 4 individuals holding shares were prevented from selling them due to AML laws.

On 30th November, the FSA published a response following its consultation on the draft Beneficial Ownership (Civil Penalties) Regulations 2018 for contraventions under the Beneficial Ownership Act 2017, which are expected to come into force on 1st February.  Because there were no material concerns raised about the proposed Regulations, the FSA intends to proceed with the introduction of the Regulations.

Fascinating 20-minute video webcast from Al-Arabiya on 30th November on how Hizbollah (amongst others) uses the former Pablo Escobar-established Colombian drugs money laundering arrangements in Medellin to smuggle cocaine and launder its money.  Highlights links into South America (Iran used to use Venezuela).  It says the drugs were sent via Panama, Guatemala and Venezuela to the US.  How the DEA infiltrated the network, but then the US apparently played down the Iran links.  It claims the Hizbollah drugs trade was generating as much, or more, as it received from Iran.  It also touches upon Hizbollah and Al-Qaida-linked groups’ involvement in the drugs trade through West Africa, and the link in terms of the cash that was transported between West Africa and Lebanon, and how Hizbollah money was used to fund US used car dealerships to acquire and trade in cars to generate more “clean” money through West Africa.

On 30th November, the House of Commons Library published a briefing paper on the Bill which would create a framework to enable law enforcement agencies and prosecutors to apply to a UK court for an ‘overseas production order’ requiring a person (in practice, generally a communications service provider or ‘CSP’) in a foreign jurisdiction to produce or grant access to electronic data for the purposes of investigating and prosecuting serious crime.  An application would only be granted if the judge was satisfied that the data was likely to be of substantial value to the criminal proceedings or investigations for which it was sought, and that it would be in the public interest.  The Bill was introduced in the House of Lords on 27th June and had its 3rd reading on 20th November and is due to have 2nd reading in the House of Commons on 3rd December.

AS part of its follow-up to a recent (free) online webinar, Baker McKenzie produced this one-page list of the 10 steps that a company can take to reduce and mitigate risks in the supply chain.

It also produced this one-page checklist 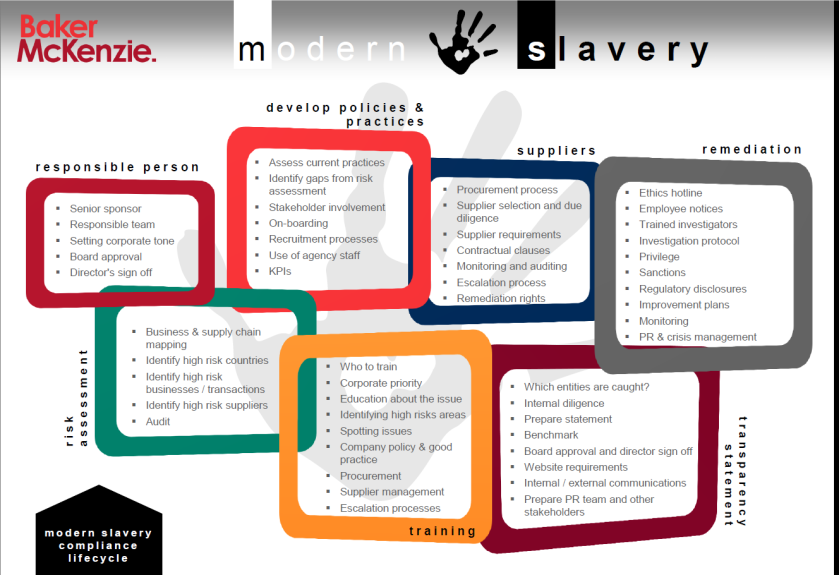 Another Occasional Paper from RUSI, on 29th November, discusses the ways that cyber-criminals manage the proceeds of their crimes, from employing money mules to using services such as mixers to obfuscate the proceeds’ origins.  It offers recommendations for policymakers, law enforcement professionals and regulated entities to target and reduce these activities.  It says that some financial institutions are exploring innovative methods of detecting money-mule accounts, and that potential responses to the threat include either expanding the list of businesses subject to AML obligations on a case-by-case basis, as and when new business models arise, or using a flexible definition – for instance, of a ‘money-service business’ – that is capable of covering novel cryptocurrency businesses.  It also recommends that the UK government should provide guidance to regulated virtual currency exchanges on dealing with higher-risk counterparties, such as mixers of unregulated exchanges, and transacting in higher-risk cryptocurrencies, such as privacy coins. Such guidance will help exchanges assess the risks they face and prioritise mitigation measures.