The Hindu on 30th September reported that India accounts for 29% of black spotted turtles (Geoclemys hamiltonii) seized from across 7 countries in South Asia, states a recent report by TRAFFIC.  Classified as vulnerable by the IUCN (International Union for Conservation of Nature) Red List of threatened species, the black spotted turtle or spotted pond turtle is native to South Asia, and is heavily trafficked – being once smuggled for its meat and is now sought after as an exotic pet.  The report titled ‘Black Spotted Turtle Trade in Asia II: A Seizure Analysis’ records seizures of 10,321 specimens in 53 instances across 7 countries between April 2014 and March 2016. 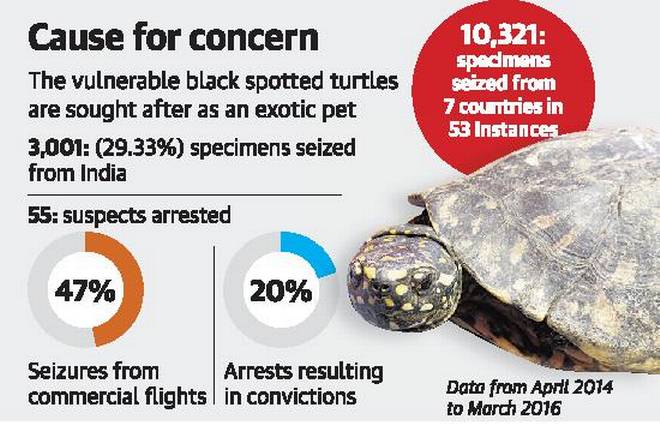 IRELAND: SHIP SEIZED OVER TOBACCO SMUGGLING HAS COST STATE €410,000 BECAUSE REVENUE CAN’T DISPOSE OF IT

The Journal on 29th September reported that the MV Shingle was seized by customs officers in June 2014, when a shipment of over 32 million cigarettes and 4,000 kg of tobacco was found at Drogheda Port.  The ship was subsequently transferred by Revenue to Dublin Port, where it remains more than 4 years later because of the State’s inability to dispose of it.  The Revenue was unable to do anything with the ship until legal proceedings in relation to the seizure had been completed, but in June 2017, the High Court made an order of forfeiture of the ship to the State.  It was subsequently decided to send the ship to a specialist recycling facility to be disposed after asbestos was discovered on board.

On 28th September, the Global Initiative Against Transnational Organized Crime released a new report which says that, as has been the case over the past 3 years, 2018 has been characterised by the increasingly urgent efforts by European states to quell the flow of irregular migrants across the Mediterranean: sea arrivals in Italy have dropped by almost 75%.  Since the Valletta Summit held at the end of 2015, the EU as a bloc and more so through the direct initiatives of some if its Member States has expanded its efforts to address the ‘migrant crisis’.  These efforts, the report says, have borne the intended fruit, in terms of reducing migratory flows, though not without the ethics of the EU being called sharply into question – with criminals, and smugglers, as well as officials and militias, involving in human rights abuses, citing examples in Sudan and Nigeria.

The Local on 30th September reported that prosecutors in Spain have decided to prosecute Jonas Falk (previously known as Jonas Oredsson), for money laundering and tax evasion, El País reported.  He was arrested in Colombia back in 2010 and sentenced to 18 years in prison by a Swedish court but then won an appeal.  He was then extradited to Spain to face money laundering charges but that trial was halted when it was ruled that he had not been given enough time to prepare for his defence.  He was released pending a new investigation, which only recently concluded.  He now faces money laundering and tax evasion charges and risks 20 years in prison as well as €24 million in fines.

MODERN SLAVERY IN THE SUPPLY CHAIN

On 30th September, Control Risks published a newsletter that said that, according to a recent estimate published by the Walk Free Foundation and the International Labour Organization (ILO), more than 40 million people were estimated to be victims of modern slavery in 2016.  This makes modern slavery one of the biggest human rights issues facing society and business today.  It poses the question: what should businesses be thinking about when managing the risk of modern slavery?  It then mentions some factors businesses need to consider.

The Talking Politics podcast from the London review of Books sees an interview of Oliver Bullough (who acted as a guide on kleptocracy tours of London) about his acclaimed new book Moneyland: Why Thieves and Crooks Now Rule the World and How to Take it Back.  Where is Moneyland?  How did London become its capital?  And will Brexit, or a Corbyn government, or another financial crash change how it operates?  A conversation about tax havens, money-laundering, the politics of corruption and the corruption of politics.   The Guardian says that Bullough traces the ways in which, over the last 3 decades, a criminal elite of politicians and “businessmen” have been able to move their thieved fortunes around the world, through offshoring and shell companies, and have seen those fortunes settle in the places that have the highest-paid lawyers and accountants.

Illicit Trade on 29th September reported that Andres Lopez Elorza, a Venezuelan vet, who was extradited to the US from Spain earlier this year has pleaded guilty to turning puppies into drug mules by sewing containers filled with liquid heroin inside their bodies for a Colombian trafficking gang.  It is alleged that Elorza and his accomplices smuggled at least 1kg of heroin into the US between September 2004 and January the following year.