WESTERN BALKANS AND THE PROLIFERATION OF FIREARMS

On the European Western Balkans website, in reporting the adoption by all western Balkan states of the Roadmap: a viable solution to the illegal possession, abuse and smuggling of small arms and light weapons in the Western Balkans until 2025, it is explained why the smuggling of small arms is so rife in the region.  During numerous wars in the Western Balkans, huge amounts of arsenic and ammunition were left behind in the hands of citizens (between 500,000 and 1.6 million households in the region own firearms).  A large number of such weapons, both legal and illegal, are subject to smuggling, but are also used for the commitment of numerous crimes, such as robberies, murders or femicide.  For example, according to the latest Ministry of Interior estimates, there are about 220,000 pieces of illegal weapons in Serbia.

Yonhap News in South Korea reported on 22nd June that Chinese companies are rushing to North Korea to explore opportunities for economic co-operation and investment amid growing signs of China loosening sanctions on the North in exchange for its repeated denuclearisation pledges.  The Pyongyang Spring International Trade Fair was held in the May 23rd to 25th to discuss co-operation with North Korean public enterprises in fields such as agriculture, electronics, machinery, construction, food, daily necessities and drainage, said the sources.  It was one of the largest international events in North Korea and drew 260 corporate participants from 15 countries this year, with Chinese firms accounting for 70% of them.  Chinese participation in the Pyongyang trade fair was also said to be linked to a ranking North Korean delegation’s 11-day tour of China’s major economic hubs in May.

FROM LEGAL TO LETHAL – CONVERTED FIREARMS IN EUROPE 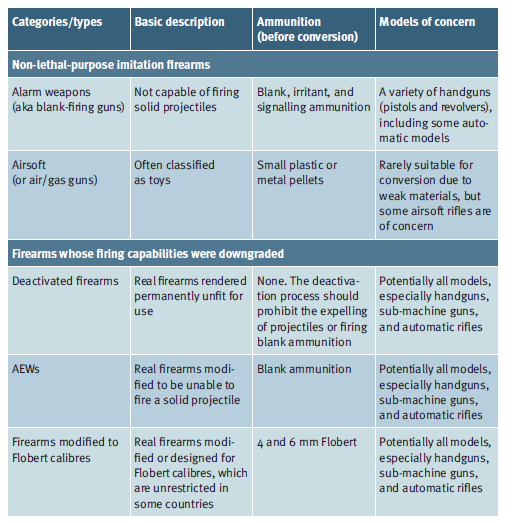 Defence Web reported on 22nd June that staff had been evacuated from terminals in Libya’s eastern oil crescent and exports were suspended the previous week when armed opponents of eastern-based military commander Khalifa Haftar stormed and occupied the ports.  It said that the fate of the ports, 2 of Libya’s largest, is crucial to the partial, fragile recovery of the country’s oil industry.  Their closure led to production losses of up to 450,000 barrels per day from a total national output of little over 1 million bpd.  Libya’s national production was cut to between 600,000 and 700,000 bpd during the oil crescent clashes.  East Libyan forces have now retaken the shuttered oil ports of Es Sider and Ras Lanuf.

Rfi on 23rd June reported that a member of the African Union’s anti-corruption advisory board has resigned over the body’s alleged corruption.  Daniel Batidam, who served for 3 years, denounces “multiple irregularities” within the organisation that are hindering its fight against graft.  The Ghanaian was elected Chairperson of the AU Advisory Board on Corruption in 2015.

Small Arms Survey says that there are more than 1 billion firearms in the world, the vast majority of which are in civilian hands, according to new research.  It presents its findings on the number of firearms held by civilians, law enforcement agencies, and military forces in a series of 3 new Briefing Papers.  The Survey estimates that of the 1 billion firearms in global circulation as of 2017, 857 million (85%) are in civilian hands, 133 million (13%) are in military arsenals, and 23 million (2%) are owned by law enforcement agencies.  The new studies suggest that the global stockpile has increased over the past decade, largely due to civilian holdings, which grew from 650 million in 2006 to 857 million in 2017.

The blog of the US think-tank RAND, in March posted an item that says that while the world bemoans the lack of inspired solutions for dealing with the North Korean missile threat, another danger is present under the public’s radar: that of hypersonic missiles and their possible spread into international commerce.  Hypersonic missiles travel at a speed of 1 mile per second or more—at least 5 times the speed of sound.  They are able to evade and conceal their precise targets from defences until just seconds before impact.  This leaves targeted states with almost no time to respond.  It says that the US, Russia, and China are leading the race to develop hypersonic missiles, with France and India close behind.  Japan, Australia, and Europe are all developing the component technologies, in some cases for ostensibly civilian purposes.  Within 10 years, hypersonic missiles are likely to be deployed and potentially offered on the international market.

THE WCO MAGAZINE – FEATURE ON THE HARMONISED SYSTEM

Also in the June edition of the WCO News Magazine is a feature containing several articles marking the 30th anniversary of the Harmonised System (HS).  The HS is a structured nomenclature comprising a series of 4-digit headings, most of which are further subdivided into 5- and 6-digit subheadings.  It was developed as a core system so that countries and organisations adopting it could make further national subdivisions according to their particular needs.  It has been adopted by nearly all countries, so that one can look at the first 4 digits and be able to identify (broadly at least) what the goods are.  The Magazine gives an example of how HS code 0409.00.

In the June edition of the WCO News Magazine is an article which is introduced by saying that sites across Serbia are being dug over and destroyed by treasure hunters and antique traders, and that valuable cultural artefacts are ending up in auctions or antique fairs in the West, where they sell for amounts which, although very high, far reflect their actual cultural value and significance.  This phenomenon is not limited to Serbia.  Smuggling of artworks and antiques is estimated to be among the most lucrative forms of smuggling, and seizures of cultural goods are growing all over the world, which could indicate an increase in this phenomenon.

And another article in the Magazine on the same subject –

CULTURAL GOODS: INSIGHT FROM THE NETHERLANDS ON THE VALUE OF COLLABORATION

This article says that the Netherlands is committed to combating illicit trade in cultural goods and has taken a range of measures to achieve this over the years.  Such measures include building a partnership between Dutch Customs and the Cultural Heritage Inspectorate (CHI), an institution that is part of the Ministry of Education, Culture and Science, and which is responsible for supervising compliance in relation to the import, export and transfer of ownership of cultural property.  How this partnership came about and what it involves is described in detail.

A final article from the June edition of the WCO News Magazine presents an experiment that the KCS has been undertaking to see whether new analytical tools could help in testing a hypothesis related to commercial fraud via express cargo and postal items and identify potential illicit transactions.

On 22nd June, the Financial Services Authority in the Isle of Man published public warnings about the following names and web addresses – Juwelz Holdings Limited and www.juwelzholdingsltd.com; Al-Khawam Investments Limited and www.al-khawaminvestment.com.

The Most Wanted fugitives pictured are thought to be on-the-run in Spain.  These men and women are wanted in connection with serious crimes including rape, indecent assault of a child and drug trafficking.  If you know the whereabouts of a wanted fugitive the NCA asks you to report to Crimestoppers anonymously: online via the Crimestoppers website, in the UK call 0800 555 111, or in Spain call 900 555 111. 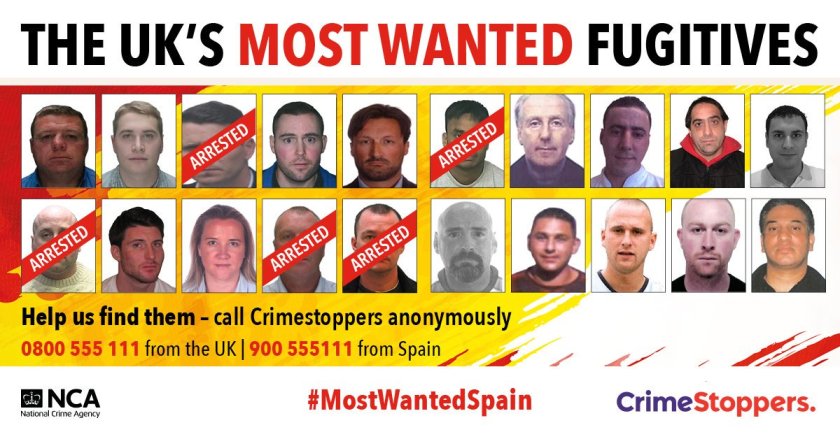 The June edition of the WCO Magazine from the World Customs Organisation includes several articles on IFF, including its links to the smuggling of minerals such as gold.  The articles deal with –

NTI has produced an interactive tutorial

In answer to the last question, it says that nuclear and radiological security is generally considered to be the responsibility of individual states, which set and enforce laws and regulations governing activities within their territories.  However, all states have an interest in ensuring that nuclear weapons and weapons-usable materials are secure, and that all other states are meeting their security responsibilities.  Numerous international initiatives address the dangers posed by unsecured nuclear and other radioactive materials around the world – but, the article cautions, current international instruments and activities are insufficient to ensure that all nuclear weapons, weapons-usable materials, and major facilities will be effectively protected against terrorist and criminal threats.

Module 4 deals with illicit trafficking – are materials available on the black market and who is involved.

Module 6 deals with international policy responses and future prospects – noting that not all materials and facilities are covered by existing agreements and guidelines.  One thing it asks is what is being done to minimise and eliminate weapons-useable nuclear material – civilian Highly Enriched Uranium (HEU), civilian plutonium and military materials.

The UK chapter from the report –

FROM THE IRA TO ISIS: EXPLORING TERRORIST ACCESS TO THE UK’S ILLICIT FIREARMS MARKET

This focuses on the illicit firearms market in the UK and the ways in which terrorists can access this market.  Researchers have noted that a number of sources provide information on illegal firearms use in the UK (e.g. crime data and crime reduction evaluations, police reports, media reports), but limited research has been undertaken to understand the dynamics and key players in the UK illegal firearms market.  Previous research undertaken on terrorist acquisition of firearms in the UK has focused primarily on the methods used by the IRA and other terrorist organisations involved in the conflict in Northern Ireland, with a strong emphasis on the international dimension of such acquisitions.  Therefore, the report says, academic and policy-oriented research lags behind policy interest in terms of terrorist access to the UK illicit firearms market.   The report seeks to address this lacuna by using a mixture of quantitative and qualitative investigative method.

Several developments could elevate and shape the nature of these risks over time, especially:

The prospect for sustained, larger-scale terrorist financing to emerge through developments such as the convergence of terrorism with cyber criminality presents a possible long-term risk of concern. This study considers these near- and long-term risks in detail.

In the EU, the newly-adopted 5th Money Laundering Directive is described as a useful first step, but more needs to be done to ensure its effectiveness, and it is important that the EU sustains a regulatory framework that remains relevant.  It also says that robust information-sharing on the illicit use of virtual currencies is essential. As exchanges and custodial wallet providers are brought within the scope of AML/CFT requirements under the 5AMLD, public sector agencies should engage and share information with them. Formal public-private partnerships can facilitate these contacts and interactions.