In Depth News provides a useful, short piece that explains the meaning of NPT, CTBT and NBT in the context of nuclear non-proliferation.

On 9th June, the New Zealand Herald carried an article saying that narco-guerrillas and ruthless foreign gangs in the lawless, remote jungles of Myanmar are cranking out high-purity crystal methamphetamine at unprecedented levels, which top drug experts say is appearing on New Zealand streets.  The last 3 years have seen a “massive surge” in crystal meth production in northern Myanmar, especially from outside gangs moving into the territory controlled by ethnic armed groups.  Methamphetamine, widely known as P in New Zealand, is typically produced using pseudoephedrine and ephedrine – everyday cough and cold remedy ingredients.  Huge quantities of the precursor chemicals are smuggled into Myanmar, mostly from China and Northeast India. 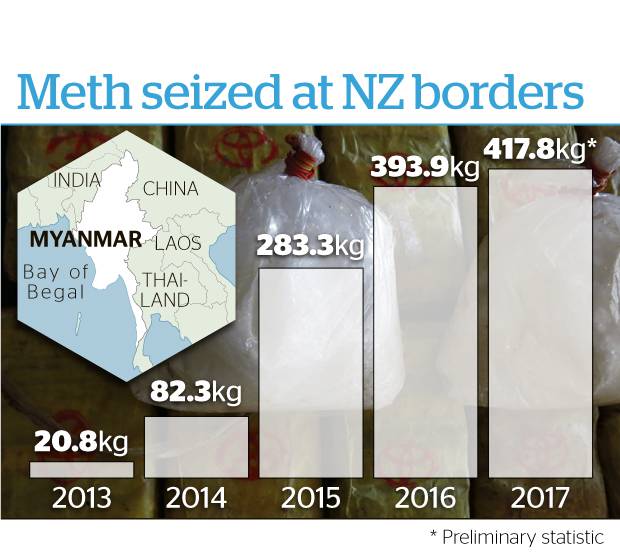 On 7th June, the New Jersey Herald reported that Egypt has repatriated 9 illegally smuggled artefacts, including statuary and coffins, from France.  French authorities had seized the artefacts at a train station in Paris in 2012.  It says that Egypt has drastically stepped up efforts in recent years to stop the trafficking of its antiquities and has warned foreign museums that it will not help them mount exhibits on ancient Egyptian sites unless they return smuggled artefacts.

Devdiscourse on 8th June reported that Venezuelan authorities are advancing in an investigation to dismantle gold smuggling gangs and have managed to avoid the extraction of 2.5 tons of the metal to date, the country’s vice president said in an operation called “Manos de metal” against gangs engaged in illegal mining trade, with 7 arrested and arrest warrants issued for another 28 people.  It is said that gangs purchased gold from the small miners in south-eastern Bolívar.

On 8th June, Xinhua reported that Customs in Nanning had busted a smuggling gang of 12 suspects, seizing more than 19 tonnes of seafood – seafood such as lobsters, crabs and squid.  Over 500 tonnes of marine products worth about $7.8 million were estimated to have been smuggled by the gang so far.

The Chicago Tribune on 8th June reported that 2 Chicago brothers were each sent to prison for defrauding and attempting to defraud banks out of $4 million by securing and attempting to secure fraudulent aircraft loans.  The brothers posed as the buyers and sellers of airplanes, filling out fraudulent loan applications and providing the banks with false and fraudulent supporting documents such as tax returns, bank statements, driver’s licences, and Social Security cards.  They are said to have used the money to buy luxury cars and homes, Rolex watches and other luxury items, and to fund private chauffeurs.

Baker McKenzie on 8th June reported that Jacksonville-based Coastal Bank and Trust founding president, Robert Levie Norris, 50, has been sentenced to 4 years in prison after pleading guilty to charges of conspiracy to commit bank fraud and obstruction of a federal bank examination.

The East African on 7th June reported that Tanzania has charged 2 chief executives of telecommunication firms – Mr Le Van Dai, MD of Viettel Tanzania (t/a Halotel) and the MD of Zanzibar Telecom (t/a Zantel), Mr Sherif El-Barary were arraigned along with 2 Chinese and 2 Tanzanian citizens who work for the companies.  Dai is Vietnamese and Barary is Egyptian.  They are accused of conspiracy, fraud and tax evasion.  The offences include use of unregistered SIM cards, operating without licences, illegally importing and installing communications equipment, and fraudulent use of telecommunication networks.

ENCA on 9th June reported that the specialist police unit raided offices of India’s Bank of Baroda and seized documents as part of an investigation into state corruption under former President Zuma.  It reminds one that the Bank of Baroda, which is winding down its operations in South Africa, was thrust into the spotlight 2 years ago when it started working with the Guptas, a family of Indian-born businessmen who are at the centre of an alleged influence-peddling scandal surrounding Zuma.

The Law Society Gazette on 9th June reported that Andrew Davies, 34, a solicitor from Wigan who told clients a series of lies to hide the fact he was stealing £1 million from their accounts has been jailed for 7½ years.  He covered his crimes by blaming administrative errors, pretending payments had not been processed or falsely saying he had carried out work, and he produced several forged documents, including land registry certificate, insurance certificates and even court judgments that wrongly told clients they had been awarded damages.

Guernsey Press on 9th June reported on a new report from the Institute for Economic Affairs think tank, with support from Jersey Finance which claims that the caricature of offshore financial centres as ‘hotbeds of tax evasion’ is outdated – with ‘no evidence’ they adversely affect other countries’ revenue-raising abilities.  The report seeks to dispel the myths surrounding international finance centres amid demands by some Westminster politicians that action should be taken against Guernsey and Jersey.  It also warned that undermining the existence of such centres could actually damage investment, economic growth and international capital flows.

TERRORISM IN GREAT BRITAIN: THE STATISTICS

A briefing paper from the House of Commons Library on 6th June explains that Pool Re is a scheme set up by government and the insurance industry to provide substantial levels of cover against losses caused by terrorism-related activity.  It explains how the Pool Re scheme – a mutualised scheme of insurance where the government provides backstop catastrophe cover – works for obtaining buildings insurance against terrorism related losses.  Owners of buildings may choose to purchase this type of insurance, but it also is sometimes required by landlords.  Tenants and leaseholders of commercial premises and blocks of flats may find themselves obliged to take out cover.  The scheme has adapted as the terrorist threat has changed and is now extended to cover against acts of cyber terrorism.  It is due to be extended further by the Counter Terrorism Bill introduced in 2018.

GAMBLING ON US CONGRESSIONAL INTENT

On 9th June, an article on the Jurist website from a guest columnist discusses the recent US Supreme Court case that is making waves by allowing for state and local governments to participate and permit sports betting enterprises.  The author says that the decision paves the way for these authorities and private entities to participate in sports-betting enterprises, and is noteworthy for 3 reasons he explains.

Crowell Moring on 8th June published an article reporting that Russian lawmakers have introduced 2 draft Bills proposing Russian countersanctions against ‘unfriendly’ states, as well as criminalising compliance with foreign sanctions in Russia.  The first measure, On Measures (Countermeasures) in Response to Unfriendly Actions of the USA and (or) other Foreign States passed both chambers of the Federal Assembly and was signed into law by President Putin and is effective from 4th June.  The article details its contents.  The second measure is an amendment Bill proposing criminal liability for Russian citizens complying with non-Russian sanctions.  Further hearings for this Bill were postponed, pending further consultations with the Russian government and the business community and a new date resuming hearings has not yet been set.  The article points out that if the second Bill is enacted in the current version (which does not appear likely given President Putin’s comments), companies operating in Russia and, in particular Russian citizen managers of the operation of Russian subsidiaries of US or non-Russian companies, would face a substantial risk arising from the potential conflict generated by US obligations that can apply to even non-US entities and the provisions of the Bill.

The National Customs Brokers and Forwarders Association of America on 4th June reported that the People’s Republic of China’s General Administration of Customs (GACC) has issued a new rule, w.e.f. 1st June, requiring the provision of new data elements related to goods being imported and exported from China.  This information must be declared on shipping documents – airwaybills and bills of lading.  Details are provided.

Oceans Beyond Piracy (OBP) has said that it will release several issue papers which present, explore, and compare globally diverse models of contracted maritime security.  The goal of this series is said to be to summarise and define various types of contracted maritime security models including private maritime security companies, military vessel protection detachments, state affiliated escorts, and coastal state embarked personnel.  These followed up a previous report from December 2016.  OBP is a privately funded and independent non-profit organisation located in Colorado, USA.

This first issue paper explores the model of privately contracted armed maritime security.   The wide range and structures of maritime security providers around the world, the disparate regulatory jurisdiction over their operations, and the diverse composition of their teams, management cells, and governance, along with the unique nature of their business models make the sector harder to understand than it may appear at first glance.  It explains that, starting in 2011, armed security emerged as an effective, though costly, mitigation measure and to date no commercial vessel employing professional armed guards has been seized by pirates.  It includes dealing with “floating armouries” –  it reports that, at the beginning of 2016, there were at least 8 in the Red Sea and 7 around the Gulf of Oman, but by the end of 2016, that number was reduced by at least 1 vessel in each region.  The largest number of maritime security companies come from the UK (40% of the total), though the nationality of the actual security personnel has changed from being predominantly British and American to more of an international mix (for economic reasons as well as the internationalising of the operations).  The weapon types used are examined –  the vast majority of weapons used are 7.62mm and 5.56mm rifles, with many industry guidelines and port or flag state regulations mandating use of the 7.62mm calibre.  Finally, monthly average costs of providing guards are detailed.

This issue paper explores the presence of uniformed military personnel embarked on a vessel with explicit approval of the Flag State.

This issue paper explores the model of coastal state embarked personnel in different regions around the world.  It concerns itself with the Gulf of Guinea (broadly defined as the coastline from Senegal to Angola, but most of the embarked security examples are drawn from Togo, Benin and Nigeria); Somalis; and SE Asia.  3 types of protection are examined – having an escort of guard ship, secured anchorage areas (SAA) and embarked military or police personnel.

This issue paper explores the use of escorts by a state military asset as a model of contracted maritime security.  It explains that, as a response to piracy off the Horn of Africa in 2008, sovereign states began offering escort services to vessels transiting the Internationally Recommended Transit Corridor (IRTC) between Somalia and Yemen.  It also looks at similar operations in the Gulf of Guinea and in SE Asia.