Yonhap News on 31st December reported that South Korea has seized and inspected a Panama-flagged ship suspected of selling oil to North Korea at sea in violation of UN sanctions.  The 5,100-ton Koti is being held in the western port of Pyeongtaek-Dangjin, Gyeonggi Province.  It is the second known vessel under probe by South Korea on suspicions of ship-to-ship supplies of petroleum products to North Korea, banned under the international sanctions over its nuclear and missile programs.  The authorities said most of the crew of the ship are Chinese or from Myanmar.

If you want to have one more thing to potentially worry over, the February 2018 edition of Air Force Magazine from the USAF carries an article saying that a long list of obscure elements are vital for advanced electronics and military systems, and that China has cornered the market.  It refers to yttrium, dysprosium, samarium, neodymium. They are rare-earth elements (REE) — described as little-known but crucial ingredients in much modern US military aerospace technology. It cites the example of a small, high-power laser weapon that the Air Force Research Laboratory wants to test in a tactical fighter aircraft by 2021.  Its active gain medium is a flexible optical fibre infused with a rare-earth element such as erbium or neodymium. Furthermore, rare-earth elements are widely used in strong, permanent magnets impervious to temperature extremes, and are used in fin actuators, in missile guidance, and control systems; disk drive motors installed in aircraft and tanks; satellite communications; and radar and sonar systems.  It claims that until the 80s, the US was the leader in mining and production of the substances, but now China is the source of over 90% of rare-earth oxides and the producer of a majority of the globe’s strongest rare-earth magnets. The article says that the largest rare-earth mine, by far, is at Baiyun Obo in the Inner Mongolia. 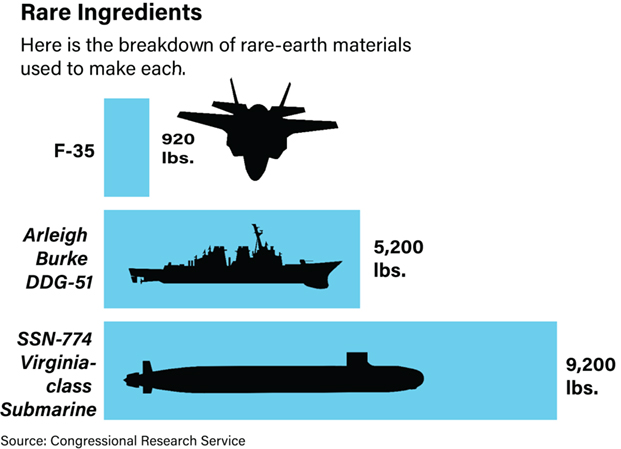