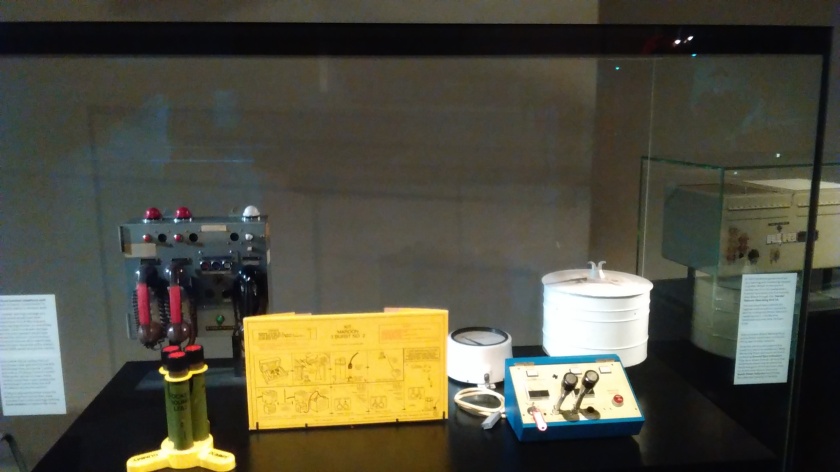 These are the (very) basic pieces of equipment I used to use during my 9 years in the Royal Observer Corps.  The white box is the GZI (ground-zero indicator), essentially a 4-faced pinhole camera loaded with photographic paper used to triangulate the explosion.  The instrument with a dial is the BPI (bomb power indicator), basically a sort of barometer measuring the peak overpressure.  The green things are the maroons, rockets also used to alert the coastguard (1 blast), lifeboat (2 blasts), with the 3 blasts indicating imminent arrival of fallout.  Out of shot on the left was the hand-operated siren to provide the familiar “air raid” warning (and perhaps the all clear…?).  The other box appears to be a version of the communications device used.  Missing is the radiac survey meter (RSM) used to measure the presence of radiation.

The ROC, part of the UK Warning & Monitoring Organisation, though wearing RAF uniforms and RAF-style ranks, and RAF bases for training, was finally stood down in 1995 after the end of the Cold War.  The several “secret” underground bases opened up around the UK in recent years were part of the same network, though most ROC people operated from small, 3-person subterranean posts…

The display is now in the Imperial War Museum in London.

For more information on the ROC, and its proud history including its vital role in the Battle of Britain, at D-Day and its postwar roles, see-